The 2010 fishing season is officially over for us at Big Hook Wilderness Camps. First of all, I would just like to personally thank everybody (guests, friends,family and employee's) for allowing the 2010 season to be one of our best. We truly appreciate our customers loyalty over the years.
Let's take a look back at Big Hook's 2010 season. Even with the downturn in the US/Canadian economy Big Hook managed a successful season. According to numerous economist's, tourism throughout Ontario was down approximately 15%. Big Hook managed to beat the curve, maintaining an even client base from 2009 to 2010.
From an operators standpoint 2010 was a quiet and uneventful year. Ice was not an issue, forest fires never threatened our camps and overall Mother Nature provided decent weather. The season began with the earliest ice out in Big Hook history, April 20th. Throughout the years, ice normally retreats from the shorelines around the 10th of May. Overall, the weather throughout the summer was far superior to 2009. May, June and July saw many days reach into the 80 and 90 degrees. August, which is normally our most stable month, saw several low pressure systems that brought cool weather and plenty of rain.
Due to lack of snow last winter, the lake levels throughout the Opasquia Provincial Park were drastically low to begin the year. West Lake was so low we couldn't even dock the plane without touching the bottom with the airplane floats. However, the middle of May brought plenty of moisture and the lakes returned to normal level throughout the summer. Burnt Lake was the exception, with high water most of the year. Water temperatures remained in the 70's the majority of the summer. For the first time in years I was able to swim almost every day during the month of July.
Now for the fishing. Fish responded to the favorable weather. Week after week fishing reports continued to amaze me, numbers and size wise. The largest walleye of the summer, 32" inches long, was boated and released at South Lake. West Lake and Favorable were a close second with 31" monsters. South Lake broke the 30" barrier 23 times for the 2010 season, an unbelievable feat. Due to how north we are located the growing season for fish is incredibly short. According to some reports, a 30" walleye as far north as us is almost 30 years old! When you catch and release these "old timers" please make sure to handle them carefully, because they have plenty of years behind them. Beginning in 1992, Big Hook enabled a No Trophy policy for walleye and northern. All walleye over 18" and pike exceeding 27.5" are to be released. The fish above these size limits are your primary breeders, keeping Big Hook's fishery one of the top in Ontario. With 18 years of catch and release, the fishery is better than ever.
It was a three way tie for the largest pike, at 45" between Central, West and Favourable Lake. Dozens of pike were reported from 42-44" from the other camps. Surprisingly, sauger are being caught throughout the Opasquia Provincial Park. The species is expanding eastward from Island Lake Manitoba.
As you probably saw during my season's fishing reports, I recommended numerous lures. Two lures in particular stood out from the rest: the fire tiger or flouro orange Shad Rap #7 for walleye and the Mann's Hard Nose Swim Shad for pike. Both of these lures combined to boat dozens of trophy fish during the 2010 season. On top of the usual array of lures, I would highly recommend adding these two in your tackle box for your next Big Hook adventure.
What is in store for the 2011 season? Big Hook hopes to continue it's leading effort in "green technologies". We plan to keep the Opasquia Provincial Park as one of the greenest provincial park in Ontario by relying on and continuing to upgrade our solar and wind technologies.
Plans for new docks at South and Lemonade Lakes are in the works. Much depends of course on a solid winter road.
As remote as our business is, 185 air miles from the nearest town, the smallest mishap is the often critical. Planning for an upcoming year is crucial and time consuming. There is no calling a plumber if the water shuts down. Electricians are not on speed dial and carpenters are not available. As a "mom and pop" operation in the remote north, our family has to take each matter into our own hands and solve the problem efficiently and effectively. I always joke that we are the "jack of all trades and masters of none." Bridging the communication gap was probably the biggest challenge for us over the years. However, advancements in technology, i.e. internet and VOIP phone communications have made the ability to operate a successful remote business. Mom, Dad and I hope our efforts in the 2010 season met and exceeded your expectations.
Once again, I would like to thank everyone for visiting us at Big Hook Wilderness Camps. We certainly hope you enjoyed your stay with us during our 2010 season. Please remember to send us your pics your latest Big Hook fishing trip and we will try to include them in our fall/winter news letter. Good luck on the water in your fall/winter fishing endeavors.
-Nathan
Big Hook Wilderness Camps
Posted by Big Hook Camps at 2:06 PM No comments: 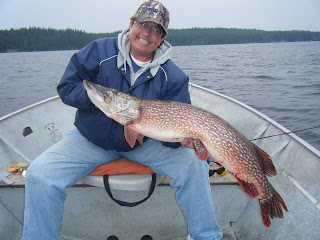 In all the years we have operated in the Opasquia Provincial Park, September has been the most difficult month to predict for weather and fishing. For example, September 2009 was the most pleasant month of the summer, with temperatures ranging in the mid seventy's and sunny skies. Fish were very predictable. Walleye were in 20ft of water aggressively feeding and pike were scattered between rock piles and dying weedbeds. Aside from fishing, we were able to close the resort wearing t-shirts and shorts. Flying the sunny skies throughout the park was relaxing and flying tree top level was never required.
However, this year is a different monster. The leaves on the birch and poplar trees have begun to yellow and fall to the forest floor. Honking geese flying south bound are now the major air traffic for us within the provincial park. On calm, clear nights the faint cry of a wolf is signals fall is on her way. The occasional moose call is audible if you know what to listen for. This September we have witnessed just one day of sunshine and consistent cool temperatures. The north winds off of Hudson Bay have been particularly strong bringing plenty of rain/mist with it. Dense clouds have hidden the sun and the ambient temperature 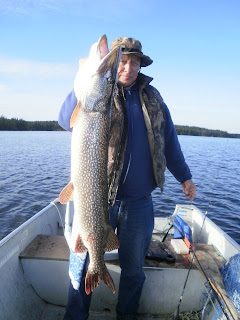 has rapidly cooled the water temperature to 55 degrees.
The walleye have responded to the cool weather with a light bite. Trolling in about 18 ft of water with a deep diving crank bait has been the most effective technique. Jigging has been tough due to the bite, often twister tails will be stolen. The cool weather however has invigorated the pike. Numerous trophies have been caught since the temperatures have turned cool. West Lake boated 7 pike between 40-45" for the last two weeks in a row. Not to mention numerous other large fish reported from the other camps. Pike are rapidly bulking up for the winter time, feeding on anything up to 1/2 their size. Hence during the fall, larger baits are very enticing to this toothy species. This time of year, it is often the large fish will transition from the muddy weed beds to areas with rock bottom.
Every year people ask me "When is the best time to fish for trophy pike?" It is often a topic that will spur much debate. Each month is different towards fishing technique's. In my honest opinion every month offers fantastic fishing. I know many of you will roll your eyes at that response. However, I have had the fortunate opportunity to fish this park for the last twenty years and can say the fishing holds year round. You just have to educate yourself on the tools you'll need and the pike habits for each lake and time of year. Because of our NO trophy take out policy, the fish will always be there year after year.
A key element for fishing, don't forget to try and experiment. Whether it's and new lure or jigging versus trolling. If the fishing is tough ask yourself, "is it the fish or the fish- 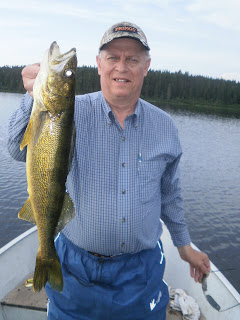 erman?" I often swallow my pride and admit I am doing something wrong. To this day I find new successful fishing technique's and spots that will surprise me. For example, this spring we were fishing the east rapids at Central and our jigs were frequently getting bit off by pike. I figured a simple solution would be to cast spoons or crankbaits. The result, absolutely nothing. Jig with a leader, zero. I couldn't believe it! Just on a whim, I tried a rig similar to a jig. I rigged up, in a sense, a bass worm rig. The fish went ballistic over this lure. We boated 6 fish in thirty minutes over 35". Never had I considered using this lure, however I have a feeling it will be a staple in my spring time fishing box.
The year is winding down to an end for us. The last guests departed Saturday. It is now time to close and winterize each of the outposts. The process of closing up usually takes between two and three weeks depending on the weather of course.
Good luck to everyone in your fall and winter fishing endeavors! Please send us your pictures from your latest Big Hook fishing trip.
-Nathan
Big Hook Wilderness Camps
Posted by Big Hook Camps at 11:15 AM No comments: