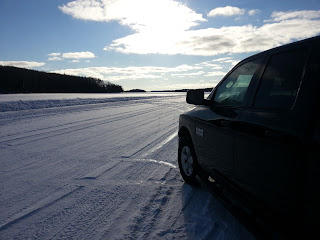 Mother Nature has thrown plenty of curve balls at us this winter.  Roller coaster like temperatures in NW Ontario the past couple of month made it nearly impossible for dad and I to predict a date for our annual winter road run.  After some deliberation and schedule shifting, we eventually gambled on making our voyage to Sandy Lake with 15,000 pounds of freight around mid February.  Unfortunately, due to record setting weather, we lost.

February 17th Dad and I made our annual pilgrimage to NW Ontario with hopes to ferry roughly fifteen thousand pounds of materials to Sandy Lake from Red Lake via the ice roads.  As we began our journey from Green Bay northward, forecasted temperatures for the week ahead looked dismal.  Future weather reports were pouring in claiming record heat and even several days of rain.  Despite those deflating reports, we stayed the course and kept hope that the weathermen would get this forecast wrong.

While we gathered our supplies in Dryden on Feb 18th, the mercury on the thermostat kept climbing and climbing.  The day ended peaking around 52 degrees and snow levels on the ground took a massive hit.  The following day as we secured our trailers and payloads, NW Ontario saw warmth peaking around 60 degrees, destroying historical recorded temperatures.  On top of the heat, plenty of rain was forecasted for the next day.  Sure enough, the following day NW Ontario received over an inch of rain and it was then we decided running the ice road would be unsafe.

Wisely, officials shut down the road until cooler temperatures returned.  Dad and I waited several days for the cold to return to NW Ontario and solidify the road however, mild temperatures persisted and our time ran out.  Reluctantly, we stored our materials in Vermilion Bay and began to work on alternative shipments for our freight.  Flying goods northbound is a huge expense and roughly breaks down to around $1 per pound; which is the primary reason why we run heavy materials up the ice highway.  Thankfully several good friends declared they would truck the goods northbound when cooler temperatures returned.

Yesterday (3/12/17), we received great news that our friends (Ed and Wayne) reached Sandy with several truck and trailer loads of materials.  They reported the road was solid but quite bumpy due to lack of snow on the ground.  Temperatures have been well below zero the past several days allowing a good freeze.  Ed and Wayne are returning to Red Lake today to grab another load of goods. On a sad note, I was unable to obtain any video footage of our winter road journey this year; we even bought a drone to capture unique footage.

Good luck on the ice/water this spring everyone!
_Nathan
www.bighookcamps.com