We are in our final weeks of business for the 2015 season. It always amazes me how fast the summer streaks on by; it seems just weeks ago I was just struggling to find open water with the float plane.  Thankfully, the summer weather is still holding on as we progress into September.  The past several days have been pleasant, 75 degrees and sunny with occasional rain.  However, last Saturday  (Aug 22nd) we experienced the monsoon of 2015, over 91 millimeters (or over 3.5" inches) of rain fell in a 24 hr period.  As a result, the lakes have skyrocketed back to spring time ice melt levels.  The level of Central Lake seems to have peaked today, rising around 14".

With the massive rainfall all the rapids throughout the park are gushing and drawing plenty of fish to the super oxygenated water. While guiding last Thursday my guests and I chose to take full advantage of the roaring north falls at Central. In a short period of time they managed to boat over 100 walleye easily and we left them biting. Oddly enough, we did not see a single pike in the flowage.

The walleye bite is still good.  As mentioned before, lots of fish are moving to the rapids although plenty are hanging in deep water.  Open water reefs in 20 ft are optimal places to start hunting.  1/4 oz jigs with orange or pumpkinseed tails have been most effective.  Surprisingly, trolling has been lackluster lately, the bite seems to be favoring the slower presentation of a jig.

The pike bite has been on fire the past several days.  Most fish are holding in the dying weeds and attacking larger baits.  A few have been found patrolling the deep reefs while jigging.  Favourable last week boated 9 fish over 39" while Cocos the week prior had an astonishing 51 fish over 31" topping at 42.5".

The higher water has been just perfect for pike anglers.  With the weeds about a foot under the surface, fisherman are able to cast without constant salad on their lures.  I managed to hit the water for a short time yesterday throwing mainly bucktails and delong eels.  Never did I have to worry about snagging weeds as long as I kept my baits high in the water column.  Pike will often explode out of the water when burning baits just subsurface, and it is exhilarating. Pictured right is a nice 41" pike I boated 8/30 while burning a bucktail about 6" under the water.

Dad and I will  be tackling some fall projects shortly.  In short, Cocos and West will be seeing some touch ups.  New windows and stairs are coming to Cocos; while West is getting a new front door and bedroom interiors.  If time and weather permits we will tackle others.

Good luck on the water everyone! Send us your 2015 Big Hook pics.
-Nathan
www.bighookcamps.com

Posted by Big Hook Camps at 7:17 PM No comments:

It amazes me every year how fast the seasons change here at Big Hook Camps.  Although the temperatures are still holding in the 70s and 80s here in the Opasquia Provincial Park, small hints of fall are beginning to step forth.  Tiny bits of yellow are speckling the birch and poplar leaves, the days are quickly becoming shorter (we are loosing approx 4 minutes of daylight each passing day) and even some of the sand hill cranes have begun their migration southbound.

The transition to fall isn't necessarily a bad thing, especially when it comes to pike fishing.  The seasonal shift triggers something in their brain that they need to fatten up quick for the impending winter.  Generally, I have found northern start shrugging off the smaller baits and start looking towards something with some substance.  Around the first week of August I'll begin throwing my larger lures and begin seeing more and more large fish take interest.  Hellhound, Bulldawgs, Depth Raiders, large spoons and #8 bucktails all fight for room in my tackle box.

Pike will bounce between rock reefs and weed beds a fair amount this time of year; to wherever the largest food source is dominant.  Lately at Central the big fish have been hanging on deep rock shelves and shunning the weeds.  This is because of the large schools of walleye congregated on these reefs.  The latest weather pattern also has something to do with it, the hot sunny clear days we have been experiencing this last week have the fish seeking deeper water.  When catching pike off of deep reefs I have found you will only boat one or two fish, then it is time to move on. Try to focus on reefs that come up to about 12-15 ft with some nearby deep water. 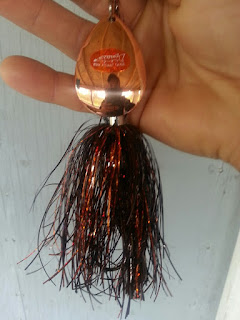 The pike at several of the outposts are following similar patterns.  Yesterday, after chatting with the group at West Lake, most fish have been caught on rocky shoals.  The biggest was a fat 43" released right off the rock 100 yards in front of camp.   However, don't totally count out the weeds. The bite has just been occurring early in the morning or late in the evening.  Bucktails, top water baits, and silver minnows are the go to baits in foliage.  #8 Orange or copper bladed bucktails with a black skirt are at the top of my list (see pic right), due to their quick retrieve.  Bucktails allow you to cast a lot of water in a short period of time.

As mentioned before, walleye are dominant on any windblown point or deeper reef in about 12-20 ft of water.  Trolling windy shorelines with Reef Runners or Shad Raps will produce good numbers. South, Central, Burnt and West all reported fish over 27" caught on deeper rock structures.
The majority of the fish have been boated on 3/8 oz jigs.

The water temps have received a huge boost jumping from 64 in the beginning of the week to 71 degrees this morning.  Water levels are still ticking downward due to hot temperatures and lack of rain.  As of right now 2015 is one of the driest summers we have experienced since 1990.

Good luck on the water everyone,
-Nathan
www.bighookcamps.com

Posted by Big Hook Camps at 9:32 AM No comments:

As the summer progresses along walleye will begin to slip down the water column.  As a rule of thumb these fish will descend 5-10 ft every month.  May-June you will find schools in 2-6 ft of water, July 10-15 ft  and August the bulk of your strikes will come from 15-20 ft.  The bigger female walleye tend to hold in the deeper waters 20-30 ft in August.  The best way to target those big slabs is to practice your jigging technique.

Various jigging combinations work very well.  3/8oz gumball jig with a twister tail trailer is by far the most popular among guests.  Recently, I have been keeping the jigs in the box and have been experimenting with other tactics such as: blade baits and the Clackin Rap.

Blade baits are a great change of pace to the jig.  They are super versatile cast em, troll em, and jig em.  Two of my favorites are the Echotail 1/4 oz and the 3/8 oz Zip Lure.  The Echotail gets the slight nod due to the fact you can customize your lure with the interchangeable tail.  Last Thursday (8/6) guiding at Central Lake the customers were casting pike along the edges of a massive weed bed while I casually dropped an Echotail to see if any eyes were holding in the area.  I struck gold with several fish in two drops.  The guests promptly switched to walleye, one using an Echotail and the other a traditional jig/twister. We were surprised with about 20 walleyes, several over 22", in a 30 minute period.  Interestingly though, the walleye would just tap and hold the tail of the jigs, whereas they just slammed the blade bait.

The Clackin Rap by Rapala is another great walleye catching machine later in the year.  Lots of people cast these baits into rocks and along weeds.  As a change of pace, I really enjoy vertical jigging these lures, the 7/16 oz is my preferred size.  The loud clack of this bait is a great stimulant for walleye down deep.  Two colors excel over the other: silver/blue and the Helsinki Shad.  As I mentioned before, the jig is the all time classic walleye catcher.  Hopefully, the previously mentioned baits will produce some fish for you when the jig just doesn't seem to be working.

The weather has been truly up and down all week long.  Daytime highs have ranged from 52 to 72 degrees.  From Saturday to Wednesday last week we did not see the sun.  Some mist and showers hampered our fishing and flying Sunday and Monday.  We didn't see any significant amounts of rain to raise the water levels.  The water is down on most lakes a good 1-2 ft, as we have had minimal rain all summer long.  The water temperatures are fluctuating between 66-68 degrees on the surface.

After chatting with most of the outposts this week fishing improved at the week progressed.  As mentioned earlier, walleye are grouping up in deeper waters.  15-20 ft rock humps and wind blown points seem to have the highest congregations.  One cannot over stress the importance of a depth finder as it will help you find those reefs.  Weeds are still holding some walleye.  Not many fish are being found near rapids at the moment but that will change if the weather turns cooler.

Pike are in their typical weed beds.  A wind blown weed edge will almost always hold a decent fish.  Afternoon and evening bites have been more productive than morning.  Top water is still the most entertaining method of catching pike and is always a blast on a calm clear evening. Don't forget your deeper baits this time of year.  Depth Raiders, bull dawgs and various other deep running baits will catch lots of fish on reefs and deep points this time of year.

Good luck on the water everyone,
_Nathan
www.bighookcamps.com
Posted by Big Hook Camps at 1:34 PM No comments: