Steve made it into Central Lake this morning.  The plane had to taxi through some slush to make it to the dock. On a good note, the temperatures were very warm; 72 degrees and melting the ice quickly.  In just an afternoon about 200 yards of ice disappeared.  According to dad, the water is the highest he has ever witnessed.  Unfortunately, the main dock at Central was swept away from the heavy ice flows and the high water.  I see some heavy labor in the near future.

Since there is enough open water to get a plane into Central, I have been given the green light to head northbound from Eagle Lake.  Unfortunately, I will not be able to update Facebook or the Blog for several days; the heavy snow over the winter knocked our satellite dishes off of our roof.  It will take a couple of days to get a technician to our location for re-installation. We will be able to check our emails and voice mail when we visit Sandy Lake. 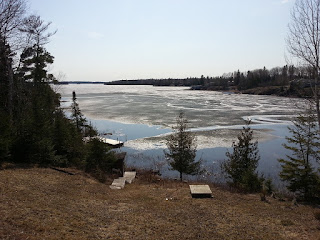 A couple of nice days has caused the ice to shrink in our bay here on Eagle Lake.  Winds and some rain are predicted for tomorrow.  That should create a nice break up, especially if the winds kick up from the SW. Weather has been a tad milder up in the Opasquia Provincial Park but fortunately the nights have been above freezing.

Sunday, Monday, Tuesday is calling for temperatures ranging into the 70's.  Can't wait for the 2013 season to kick off.
-Nathan
www.bighookcamps.com
Posted by Big Hook Camps at 4:42 PM No comments:

The big question this year in NW Ontario is, "When will the ice go out?"  After a chilling long winter the ice has been slow to retreat from the shorelines here in the north country.  Weather this spring has been erratic and unpredictable thus far.  A 15" snow storm one week ago in Sandy Lake certainly did not aid the cause of opening up water.  However, nice weather has finally settled in and has started some thawing. 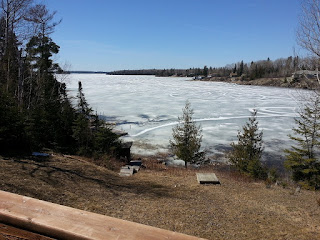 Temperatures the next couple of days are predicted to hover in the upper 60's and lower 70's in most parts of NW Ontario.  Most of the snow has finally melted in the Eagle Lake area (see pic right taken 5/5/2013). As you can see, the ice has a long way to go but it is starting to retract.  I am certainly chomping at the bit to get into the airplane and get crackin at opening the camp.

With a later ice out comes changes in the fishing patterns.  Pike and walleye will most likely spawn later causing a shift in some fishing spots.  The weed growth will also begin later, so look to find fish in the moving water and warm mud flats early on.

Over the next couple of weeks I'll keep snapping and posting pics of the ice retreating to our Facebook Page and here on the Blog.  Keep thinking warm thoughts.