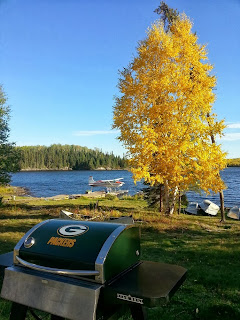 The lakes have turned, the trees have yellowed, flocks of geese have begun their migration southbound and moose have started bellowing calls throughout the night.  Fall landed upon us at Big Hook about a week ago.  Frosty nights started freezing water lines around the 14th of September and snow squalls swept through the Opasquia Provincial Park on the 19th. Since then, a warm front has crept back into the area.  However, the locks are on the doors and the Opasquia Provincial Park is now a population of 0.  Dad and I departed the north country on the 23rd of September under cool but sunny conditions.  A two hour flight brought us back to Eagle Lake, where the plane will sit briefly before I take it back to Selkirk, MB for winter storage.

It is amazing how quickly the daylight disappears. In June fisherman can stay on the water till 11 pm without any trouble of navigating the waterways.  However, the sun is down and it is pitch black outside at 8 pm come September.  Not only did the daylight disappear as the summer progressed but so did the water.  2013 was probably the driest year we have ever experienced in our 27 years of operation.  We began the year with a late ice out and record high waters only to finish the fishing season with record low water levels.  Several forest fires sprinkled the countryside due to the lack of rain, but none blossomed into raging infernos.  Most fires just sat and smoldered for weeks on end burning minimal area.

The sunny skies aided weed beds this summer. The healthy weeds helped produce great numbers of trophy northern pike.  Biggest pike of the summer from all of the seven outposts was boated and released at Cocos Lake topping at 48".  Biggest walleye this summer was boated, photo'd, and released at South Lake measuring an impressive 32".

Dad and I completed several year end projects in the past couple of weeks.  One of those projects included constructing a new shower addition for South lake.  Also, another 16' X 8' floating dock was constructed for use at Central Lake.  More projects will follow once the winter road starts running and we are able to haul the necessary materials.

Mom, Dad and I would like to extend our thanks to everyone who helped make our 2013 season great. We are so thankful for so many gracious guests and look forward to visiting with everyone in the years to come.

I hope the fall treats everyone well, especially on the water.  It is now my time to angle for trophy musky. Let the fish of a thousand casts begin at one this evening.