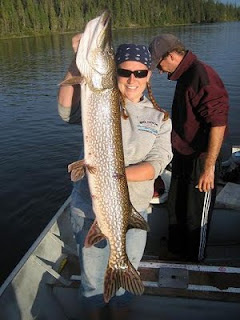 I am a firm believer, that the color of the lure should match the weather patterns. I always say "Dark days, dark colors and light (sunny) days, light colors." The past several days here at Big Hook Camps we have had cloudy days and cool weather. After guiding the past two days at West Lake, I noticed a pattern that the guests using black twister tails where out fishing the flouro orange tails 2:1 for walleye. What was even more convincing was the pike. We boated 12 pike between 30-38". Of those fish, only two were caught on a silver spoon or brighter color lure, the others were caught on a black skirted bucktail or a black Bulldawg.
Also, the fish have responded to the cool dark weather by holding in somewhat shallower depths. Walleye's are hanging in 6-12 feet, with the occasional fish in 18+. Pike are now finding some weeds to shelter themselves. Weeds are finally reaching the surface. Although it isn't a great weed growth year, they are still holding fish. Water temps are still hovering around the 65 degree range. I unfortunately don't see much change in the water temperature's according to the weather forecast. For current weather at Big Hook visit:

I was able to chat with several of the guests from the past week and here is a quick fishing report from the camps:
South Lake: Guest's last week boated and released four 28" walleye. The four fish were in surprisingly deep water, around 30 ft, according to the guests. Many fish in the 25" range were found shallower, mainly around 12 ft. Jig and twister are still the most effective lures.
Burnt Lake: The four guests at Burnt Lake last weeks tallied 1500 fish. Several lunker pike were recorded at 42", 38", 37" and several at 34" inches.
West Lake: After guiding there the past couple of days we boated and released a dozen pike between 30-38". Most pike were hanging in the south west corner of the fish bowl, others were in the horseshoe. Saw a couple of monsters in the northeast corner of the fish bowl. We also released a 28" and a 25" walleye. Both were in 6 ft of water on the north end of the lake.
Central Lake: Walleye are now beginning to concentrate on reefs and points. The Moore party caught a dandy 41" pike on the north end of the lake near the shore lunch island.

On a final note, we will be filming a TV segment August 8th-10th with Real Outdoor Destinations. I'll keep you posted on when the show will air and on what station.

Good luck on the water everyone. Throw the big one's back!
-Nathan
Posted by Big Hook Camps at 9:11 AM No comments: 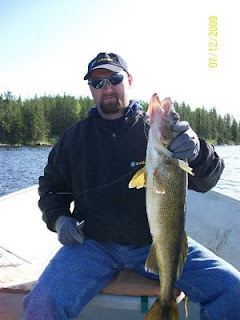 We are on the tail end of the May Fly hatch here at Big Hook Wilderness Camps. The bite is improving day by day. Water temperatures are beginning to creep up into the higher sixty's. Yesterday I recorded 65 on the surface at Central Lake. Walleye's are still hanging in the 8-12 foot range. Pike this year are hanging on points and reefs due to the lack of weed growth. Soon the walleyes will begin their decent into depth's of 15-20 ft. I have been catching some in that range vertical jigging with a white twister and 3/8 oz jig head.

Weather has been mild. For the past several days we have seen sun in the morning and pop up thunder storms in the afternoon. Temperatures have been hanging in the high 60's and lower 70's.

I spoke with the guests at South Lake and they have recorded nice catches of 25", 26", 28" walleye. Southwest guests were amazed catching walleye "every cast" 200 yards from the cabin. Who said the best fishing in on the far end of the lake?
At Central the East rapids is still the hot area for walleye and The Rock on the north end of the lake has been producing quality size fish. 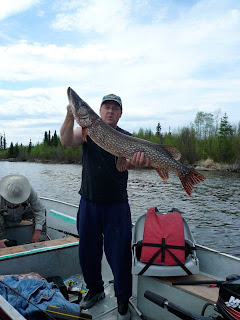 Attached are some pics that have been emailed. 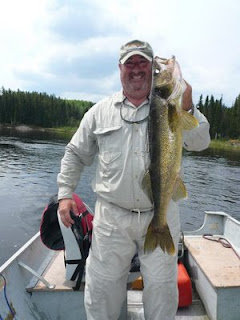 (Top right: 29.5 walleye caught at South Lake. Lower left: a beauty 42 inch pike caught on Cocos by Geo. Lower right: Another nice Cocos catch from Joe S with a 25" walleye. )
Posted by Big Hook Camps at 8:25 AM No comments:

All of our outposts here at Big Hook Wilderness Camps have various types of communication to contact us at the base camp Central lake. We encourage our guests to contact us whenever needed whether it is for supplies or questions and concerns. Should you need supplies, let us know ahead of time and we can bring it to you on the next trip. Keep in mind, since we are a fly-in camp, weather plays an important factor in our ability to reach the camps.

South Lake, West and Cocos incorporate the use of radio phone's similar to a CB radio. Operation is simple, just turn on the volume switch and turn it up. We are listening everyday on the other end between 5:00-5:30 pm.

Favourable, Burnt, and Southwest utilize sat phones for communication. Once again, operation is easy. We have two different types of satellite phones: Globalstar hand held phones and Glentel base phones.
Globalstar phones operation is similar to a traditional cell phone. Simply stand outside in a clearing with a southern view, rotate the antenna, press power and wait for a signal. Dial Big Hooks number 905-963-1260 when you receive a signal. Keep in mind it can take a couple of minutes to acquire a signal, so be patient.
Glentel base phones operate slightly different. Just place the dome outside in a clearing, connect the positive and negative lead to the battery, press power, and wait for the phone to acquire a signal. Once a signal is recieved, dial Big Hooks number 905-963-1260 and press send.
If we happen to miss your call and you recieve the voicemail, please leave us a message. We check our voicemail regularly.

Good luck on the water everyone.
Posted by Big Hook Camps at 9:58 AM No comments: 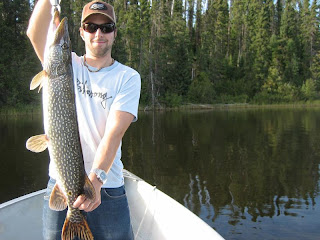 We have noticed a small hatch beginning for the May flies over the past couple of days. This is good news because I believe that is all we are going to see for the year in the greater Big Hook region (knock on wood). With the hatch so late in the season could mean the May flies will be nonexistent for the summer.
I spoke with the guests at South and West Lake today. West reported an excellent pike bite in the "fish bowl" half of the lake using various plastic baits. South Lake has been boating and releasing numerous walleye's flirting with the 30 inch range.

The fish are slowly moving into deeper waters averaging around 12 feet of water for walleye. The pike are holding more on rocky points and current areas due to the fact weed development is slow this year. Soft plastics have been getting great results for pike such as: the Storm Swim Shad and medium or small sized Bull Dawgs.
For walleye, I still believe you can't beat the good ole fashion jig. It may sound boring but it has proven results. 1/4 oz or 3/8 oz jigs, the jighead color really doesn't matter, it's the twister color that counts. We have tried every color under the sun this past week and the only color that HAS NOT been effective is the clear see through chartreuse green. Every other color was walloping the walleye, yes even pink was doing well.


Good luck on the water everyone. Remember to put the big one's back!
-Nathan
Big Hook Wilderness Camps

Posted by Big Hook Camps at 2:30 PM No comments:

Why jig when you can fly?

Why jig when you can fly? That does not make sense....or does it? In this case however, the phrase makes sense when one person in your boat is catching walleye after walleye on a fly rod. The magic lure on the end of the line was a brown 3" clouser tipped with a yellow or white twister tail.
Truthfully, I never believed that a fly could be so effective for walleye, let alone in the middle of July. However, yesterday I was proved wrong in my beliefs.
Walleyes darted in and out of the swift current below the north rapids of Central Lake, striking the fly as it lazily drifted down stream. The action was convincing enough to where I now believe I need to take up a new hobby and begin practicing my 10 and 2 casting. Attached is a video as proof of yesterdays success.

On the fishing front...

The old adage says "Fish bite best before a big storm." I couldn't agree more. Today, on the verge of a nasty storm front, guests reported some of the best success of the week. One couple boated over 50 walleye in an hour and a half before the weather started darkening the skies.
Walleye are starting to move a tad deeper into the 8-12 range. Water temps are still cool for the time of year. After a full day of sun, the warmest water I could locate was about 65 degrees on the surface.

Weed growth is way behind this season at all Big Hook Camps. Weeds are struggling this year with the cooler temps and higher waters. Speaking of high waters, Cocos guests for the last two weeks have been unable to make it up the Sagewitchewan rapids due to the increased volume of water.
We are still keeping our eyes on the water and skies for the infamous mayfly. None have hatched yet and hopefully they will skip a year.

The top two lures of the week are the: Johnson silver minnow with a white twister trailer for Pike and the DOA tiny terroreyze brown jig for Walleye.

Good luck to all on the water! Remember to put the big one's back.
Posted by Big Hook Camps at 1:15 PM No comments: 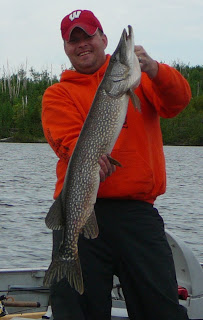 It is that time of year. The time of year everyone looks to the sky and the surface of the water for, what else, May Flies. Now I'll admit they aren't quite appropriately named, I would call them July Flies for this area. The May Fly is a fisherman's mortal enemy and main competitor for the all-Canadian walleye. For roughly three days in the month of July, millions of May Flies cloud the skies and litter the surface's of lakes luring walleyes to a top water bite. In the evenings, one can witness a barrage of fish attacking the surface gorging themselves on struggling May Flies.
I'll admit, fishing during this time can be tricky. Walleyes with full bellies, are lethargic and unambitious.
There is hope for the avid angler during this time. The main focus is size. Scaling down is a primary concern. I found using smaller baits and brighter colors can be very effective while combating the May Flies. 1/4 oz jigs and small, I mean SMALL, Rapalas.
I'll keep my eye on the sky and let everyone know when the flies start clogging the skies.

Water Levels
Water levels have shot up in the last week. Rapids are now gushing more than ever, thus drawing fish into their currents. Many guests have been focusing their efforts around areas with current and flow, often with great and pleasing results.
The increase in water levels has made it tough for weed growth. Coupled with a cool cool spring, weed growth is slow and behind. 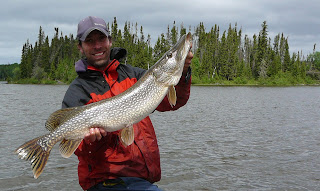 Weed beds have begun growing however are no where near there usual levels.
Weather has been cool thus far in July and water temps have dipped slightly. For current weather at Big Hook Wilderness Camps visit:

Attached are various pics from the Bauer Party at Central Lake during the week of June 21st. Thanks for the pic's guys! And I had to sneak one in of myself. Remember to send us pics of your latest fishing trip and I'll post them on my blog. 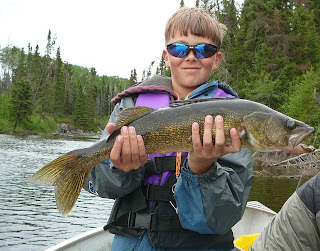 Good luck on the water everyone. Remember to practice catch and release. 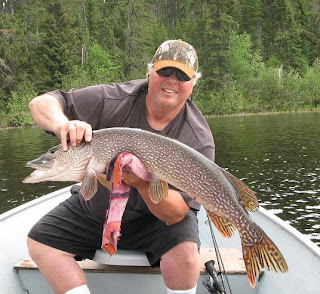