Fishing With a Legend

Last week I had the privilege to guide and film with a fishing legend, Dan Gapen Sr.  Those of you not familiar with Dan, he is a writer (currently published in over 100 circulated sites and magazines), TV-host and hall of fame fisherman.  He has spent a lifetime of filming, educating and just simply enjoying the outdoors.  A quick search through www.gapen.com, you can read some of his famous stories and check out plenty of their great and effective lures they have to offer.  Now 82, Dan and his company partner "Bobber" Anne have spent the majority of their travels throughout the America's all the while journaling and filming their endeavours.

We were honored when Dan and Anne first approached months ago us about visiting us at Central Lake to do some filming on the unique Opasquia Provincial Park.  This was one area of Ontario that they wanted to cross off their bucket list for filming. The remoteness and geology of the area intrigued him the most.

Overall, the weather cooperated enough and we were fortunate to capture some great moments on film.  Dan liked to focus on the outdoor experience as a whole, not on just the biggest and most fish we could put in the boat, which really impressed me. So many times people lose perspective on where they are and get tunnel visioned on that 40" pike or 27" walleye. Yes, we fished plenty however, we also focused on some things nature had to offer.  For example, an afternoon of blueberry picking.  Let me tell you, nothing is better than fresh blueberry muffins or pancakes.  We enjoyed plenty.

I'll keep everyone posted about our episode/videos when the editing and post production is finished.  I am especially excited to see some of our underwater footage of walleye stalking our baits on the TV.  We were fortunate enough to capture several hookups and numerous strikes in 10-20 ft of water. 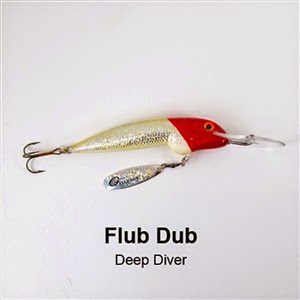 Throughout the week with Dan I experimented around with his line of fishing tackle.  Three lures in particular, which I'll admit I never heard of, really produced well.  First, the Flub Dub. This unique crankbait pictured right, caught several pike over 33" and plenty of walleye.  I was a sceptic at first noticing the lone rear hook, however we never missed a single hit. Trolling this lure along 12' flats or breaklines is where it really produced.

The second lure, the Ugly Bug, looks like the name sounds.  It is a jig setup with a rubber tail that has multiple flanges darting every which way.  I had my best luck with this lure jigging along weed beds.  I had my fair share of bite offs from pike but I was out fishing everyone.

The final lure I enjoyed for the week was the Spin-Bee.  The 1/4 oz or 3/8 oz was a blast to vertical jig on deep reefs.  Armed with a spinner instead of a twister tail, fishermen never have to worry about the rubber tail getting bit off from short striking fish.

Every year I try to find effective alternatives for walleye fishermen to try other than the straight lead head and 3" tail.  These lures previously mentioned are quality lures worth a try.  I now have several of each in my tackle box for my next outing.  Another lure that has been shining that I also blogged about is the Echo Tail.  This lure started the year sluggish however now that the walleyes are settling in deeper water it has been an absolute beast.

The walleye are well....going deeper, however to add some confusion, we found plenty in the weeds last week.  One day we would nail the fish in 12-20 ft of water on reefs and windblown points.  Only to return the next day and find nothing.  After some looking around we eventually found lots of fish hanging near the weeds.  The fish are obviously moving around so do not get discouraged if you strike out on a spot, try it again the next day and you could be rewarded.

Pike are starting to pack on the pounds for fall.  Most are hanging in foliage but I like to throw my big baits (depth raiders and bull dawgs) this time of year on deep reefs.  You just know they are hanging around stalking a lazy walleye. The topwater bite has been very discouraging this year, I have spent several evenings tossing with minimal action.  I would suggest focusing on bucktails or spoons during what I call the "magic hour" of 7-8 pm.  I have boated more big fish this year during that time frame.

Water levels have been falling due to lack of rain.  The surface temperatures are hovering around 67-69 degrees on most lakes. The nights have been fairly cool, dipping into the lower 40's.  This cold has had an effect on the weed beds over the last several days.  They are beginning to lose their bright green color, which means they are on the verge of dying.  Once the weeds start to fall pike will move to other areas to ambush prey.

The dog days of summer have settled upon us at Big Hook Camps.  Light and variable winds with warm temperatures have graced us for almost two weeks now. Today (8/6/2014) has been the warmest day of the summer peaking at 32 Celsius (almost 90 F).  The warm days unfortunately have resulted in very little rain for the last month.  I know most fishermen do not want me to utter this next phrase, but....we are in need of some rain.

The boreal forest throughout NW Ontario is becoming quite dry.  The water levels at Central have dropped about two feet over the past three weeks. Most rapids throughout the park are becoming small flowages as a result.  The water has warmed considerably, most lakes have surface temperatures hovering around 72-75 degrees.

Fishing tactics are still similar to the past blog.  Walleye are holding around wind blown points and reefs in 15-25 ft of water.  Jigging 3/8 oz black heads with white tails have really been an effective color combination.  Crawler harnesses are another great way to reach the depths.  Don't completely rule out weeds for walleye.  Walleye will often seek out bait fish among foliage.  While guiding yesterday at Central we found many walleye hitting Johnson silver minnows while pitching for pike in thick weeds.

Pike have been incredibly active lately.  However, the sunny days allow northern to get a great view of your baits and result in numerous follows to the boat. The peak bite for big fish has been from 6 pm-9 pm when the sun is a bit lower in the sky.  The past several trips out I have packed only three lures for northern:
Those three baits have not disappointed.
Locate your favorite weed bed  for toothy trophies and start tossing bucktails along the edge, or try your best to weave the lures through the foliage. If the weeds are too thick the Johnson Silver is the perfect bait to navigate the thickest beds.

Burnt
Hot spots #5 and #6 are where I would focus my efforts for a big pike.  Throwing bucktails at the thickest parts of the weeds will produce some great fish.  Walleye can be found jigging on any reef in around 15 ft of water.

Central
The north narrows has begun to really heat up for trophy fish.  Also, while guiding on the west end of the lake recently (8/6) we released 10 fish over 30 inches not including a 38.5" and a 42".  Every fish was caught on a Johnson silver minnow 1 1/4 oz with a white twister tail.  Several guests attempted the south portage 8/5 and returned home with big smiles.  "Fishing was so good, we boated 60 walleyes in 60 minutes," exclaimed one gentleman.

Cocos
The deeper pools around Hot spot #9 have been great for nicer walleye.  Hot spot #8 and several nearby weeds have held great pike.  The water is beginning to drop throughout the Sagawitchewan river, motorist should use caution as numerous reefs become exposed.

Lemonade/Favorable
I'll be redundant, because it is difficult to offer variable reports for Lemonade, but the lake is still producing plenty of 18-22" walleye.  Favourable produced some nice sized pike including a 38" out of pike alley recently.  Hot spots #2 and 4 are among my favorite for pike as the summer progresses.

South
Some amazing numbers for trophy walleye were posted again last week. Roughly 30 fish were released over 25" up to 29.5".  The fish were more spread out among different locations however the majority of the fish were boated between 7-9 pm.  Deeper waters (20-25 ft) still held the larger females.  Some great pike fishing gets overlooked at South Lake, don't be afraid to pitch those weed beds.

Southwest
The Beach party has been coming to Canada since the early 90's and exclaimed Southwest lake offered more fish than any other trip.  Hot spots #2 and 4 were the go to areas.

West
Hot spot #2, 6 and 10 should be focal points for guests.  #2 is a large weed bed along an island that is perfect territory for trophy fish.  #6 is a long stretch of narrows that leads to the fish bowl.  Slowly work the northern half of the narrows beginning in 10 ft of water, motor gradually to the shallower water.  #10 is a great reef that top out at 9 ft with 60 ft of water nearby.  Jig this reef or pitch deep diving cranks for big walleye.  Big pike prowl this area also.

Good Luck on the water everyone,
Nathan
www.bighookcamps.com
Posted by Big Hook Camps at 3:13 PM No comments: