It's a wrap.  The 2017 season has come to a close for us at Big Hook Camps.  First off, all of us at Big Hook (Dad, Mom, myself, Shadow and Luke) would like to extend our biggest thanks to all of our clientele for choosing to share the beauty of the north country with us this season.  We look forward to swapping fishing stories with everyone at the sport shows this winter.

Dad, Shadow and myself completed last of the projects and flew south bound to Eagle Lake on the 22nd of September in the Cessna 185. With a whopping 50 mph headwind for the majority of the flight,  I felt we were moving as fast as the geese heading in the same direction. 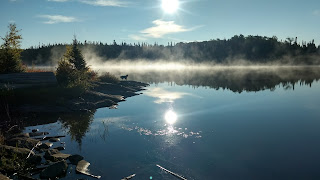 Overall, the 2017 season began with some unseasonably cool weather in June and closed with unseasonably warm weather in the first several weeks of September.  Historically September has been a giant question mark for weather in the Opasquia Provincial Park, you can have 75 degrees one day and 35 the next. Perfect example is having one hard frost on the 19th.  The boardwalk and waterlines were completely frozen up for a couple hours in the morning.  The very next day was 72.  Precipitation was minimal during the 2017 season; overall it was probably the driest season on record.  Water levels were at least two feet below normal at the end of the season.  Also, several forest fires burned in the Opasquia park in August but nothing was threatening.

The fall in the north is my particular favorite time of year.  I've probably stated it a million times in this blog.  The cooler temperatures are refreshing and scenic shorelines with colorful changing leaves are picturesque as they come.  Fish in the fall are still very active but the patterns change considerably.  The walleye bite becomes light and they descend to deeper locations throughout the lake. Whereas the pike become more aggressive and are fattening up for the long winter ahead.

In regards to fishing, the 2017 produced some sizable catches.  The biggest northern of the season were tied with two 45" pike, caught and released at West and Cocos lake respectively.  Six walleye at South Lake topped the 30" mark for biggest of the season.  The most 40"+ pike were caught at Central Lake and the most 25+" walleye were boated at South Lake.

Unfortunately, fishing time is short for me in the fall while at Big Hook.  Our goals at the end of the season is to accomplish as many projects as Mother Nature allows.  This year we decided to focus on the big cabin at Central Lake.  All new interior tongue and grove pine walls were installed along with new laminate counter tops and shelving.  The new interior certainly brightens up the cabin and makes it feel even bigger.  Another project we tackled was setting a new foundation under the Cocos lake cabin. We raised the cabin about 6" and set all new pressure treated posts and pads.  We also dug and installed a new grey water septic system.   Finally, West lake received a new shower and a fresh out house hole was dug for the 2018 season.

Now that the season is over I get a chance to wet a line.  Hopefully I'll be able to trick some trout, musky and small mouth over the next week.  Good luck on the water this fall everyone.  Once again, thank you all so very much for your business! Send pictures of your 2017 Big Hook adventure when you can.