Loss of a quality establishment

Those of you who frequent NW Ontario often are most likely familiar with the Village Corner in Vermilion Bay.  It was one of the last stops for travelers before venturing up HWY 105 to Red Lake.  This restaurant/gas station was a great establishment that offered everything from fishing gear to heaping portions of food.
Unfortunately, last fall the local business caught fire and burned beyond repair.  Everything was a total loss in the gas station and the restaurant.  Cause of the fire was believed to be an electrical short. Locals were hoping to have the business rebuilt for the 2011 season, however it looks as if the Village Corner will not be operating anytime soon.
For travelers looking to refuel in the Vermilion Bay area have the option of Bobby's just 2 miles west on Hwy 17.  Just like the Village Corner, Bobby's offers fuel, has a great selection of fishing tackle (rather expensive, in my opinion) and gift store.  Neighboring Bobby's is now Busters Barbecue Restaurant, not a bad place for lunch with large portions and a great tasting sauce.  The local BBQ sauce has won so many taste competitions that a national distributor out of California agreed to supply groceries stores throughout the USA.  Keep your eyes open for Busters Blueberry BBQ sauce.  I have already seen the product on the shelves in several towns throughout Wisconsin.
2011 Ice Watch 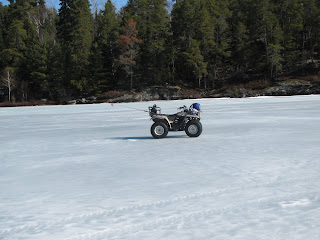 Now is the time of year Big Hook starts getting out the blow dryers and heating elements to melt the ice covering our bodies of water.  As of April 12, 2011 17 inches of ice still covered Eagle Lake, ON.  Up north in the Sandy Lake area, the snow is melting quickly, however ice is still clinging to the shores.  Cool temperatures in the region are slowing the melt off.  Massive amounts of snow this past winter suggests that we will have high water this spring throughout the Opasquia Provincial Park.  As every spring, Big Hook is thinking warm thoughts.
(Attached right is a couple of photos taken while trout fishing on Eagle Lake April 10th, 2011). 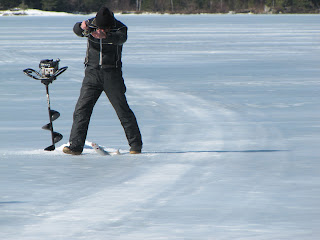 The 2011 season is almost upon us.  Temperatures are on the rise which means the snow is melting quickly.  It is only a matter of time before the lakes are devoid of ice.  This time of year is the equivalent of limbo for most fisherman in the north.  River fishing is available however most lakes are still covered with ice preventing fisherman from launching their boats.  To pass the time before lake open I like to inventory and organize my tackle and make sure my gear is up to par.

Over the summer I manage to lose hundreds of dollars in fishing tackle.  Those toothy pike are the culprits to most of my loses.  My refusal to use steel leaders while trolling is detrimental to my tackle box.  However, I'll risk loss of a lure for a 25"+ walleye any day.  Even in our neck of the woods walleye are generally leader shy. To catch more trophy walleye, first ditch the leader. I'll explain an alternative to leaders in a moment. My second reason to avoid trolling with leaders for walleye is they truly mess with the lures action. Walleye lures on average are smaller, less than 1/2 oz.  Pairing that with a bulky leader just causes the lure to slosh and pull through the water with no vibrant action.

Instead of a steel leader, I'll splice an 18-24" section of 30# fluorocarbon.  Fluorocarbon is valued for its refractive index, which is similar to that of water, making it less visible to fish.  Plus fluorocarbon is more dense than traditional mono filaments allowing baits to reach deeper depths if needed.  Fluorocarbon does have drawbacks.  Since the line is more dense means it is subject to line memory. Be ready to expect plenty of loops and twists if you line a whole spin casting spool.  The other down side to fluorocarbon is simply the cost.  I just purchase the leader spools that offer approx 25 yds of material.  Ande and Berkley manufacture quality fluorocarbon leaders.


Back to gearing up for the summer.  It is crucial to inspect your fishing reels and rods before the fishing season begins.  Every fishing combo that has spent the winter in the garage or attic could use a little TLC every spring.  Believe me, there is nothing worse than flying 185 miles from the nearest town only to have your gear foul up on the first day.


Fishing rod maintenance is simple.  Inspect all your guides and make sure there are no chips or cracks.  A tiny crack in a guide will cause line to fray and eventually snap.  If a tip is missing on a rod, no sweat, just take it to your local tackle shop.  Most stores will replace tips for around $5 while you wait.


Reels can be a little more complicated to maintain.  First, begin with the fishing line on the spool.  Is it the same line that came with the reel? If so, it is time to be changed.  Mono filaments that have been exposed to the sun deteriorate over time becoming brittle and unpredictable.  Once again, stroll down to the local tackle store and get spooled up for around $6.  No need to fumble with line yourself, let the store utilize their bulk spools and line winders.  Braided lines are more resistant to the suns UV rays and can withstand years of abuse before changing.


Second, inspect the mechanics of the reel.  Is there a grinding noise when you attempt to retrieve?  Sand and dirt is most often the culprit.  A simple clean and grease can make an old reel feel like new again.   Most of the time a small dab of reel oil on the bearings and drag washers is all that is needed. Check the bail on spinning reels and the thumb press on bait casters.  Another common malfunction to fishing reels is a busted bail spring.  This .05 cent part is the Achilles heel of fishing reels causing fisherman more frustration than....well fish.


Now that our gear has passed inspection, it's time to hit the water.  Oh wait....walleye opener isn't until May 21st in Canada.  Back to strolling the stores for me.

Posted by Big Hook Camps at 1:59 PM No comments: