Signs of winter have been quickly disappearing around Eagle Lake.  The ice on the majority of the surrounding lakes has completely melted and only trace amounts of snow can be found in the darkest parts of forest. Eagle Lake still has some ice but warmer temperature has caused the ice to recede at a rapid pace. 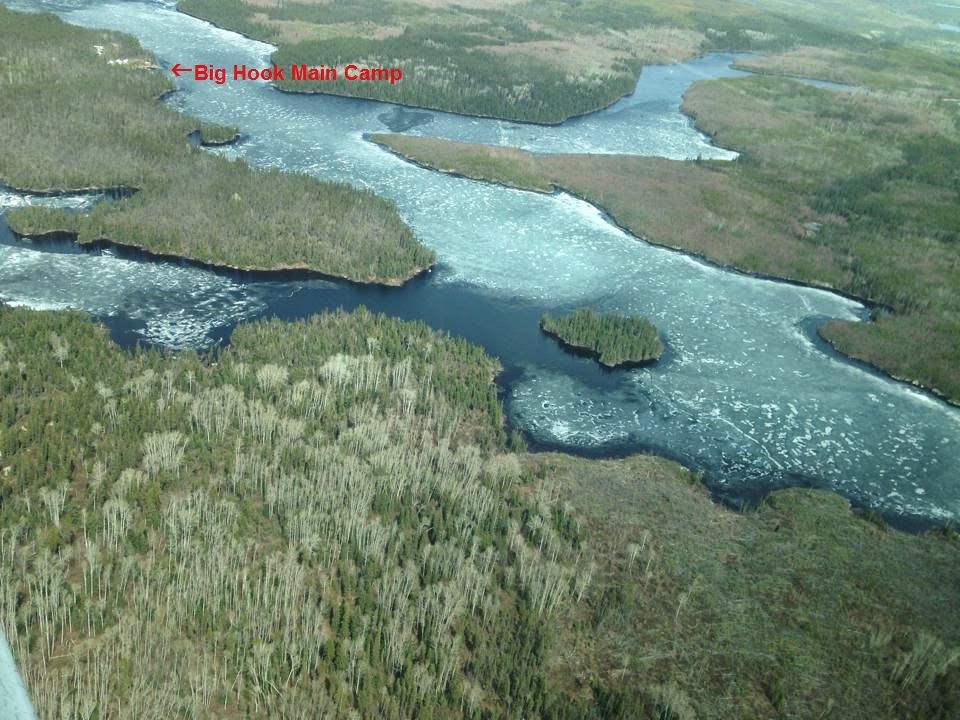 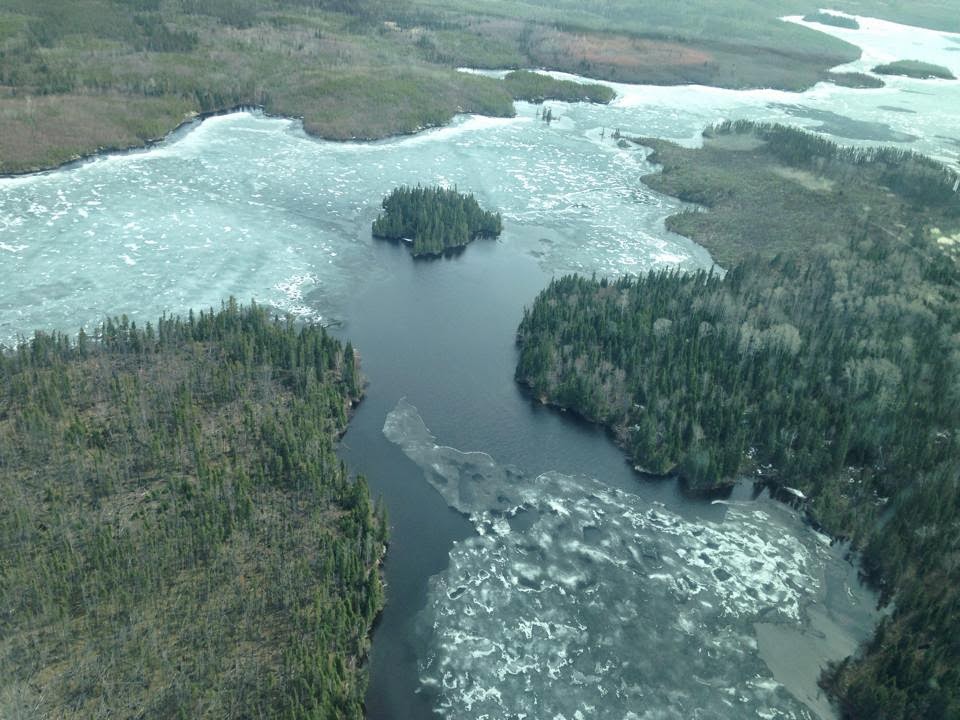 Winters grip however, is still present 500 kilometers north in the Opasquia Park. Yesterday (May 19th), a pilot from Sandy Lake seaplane flew towards Central Lake to observe the ice conditions throughout the Provincial Park.  According to his reports, the ice is sluggishly melting.  A small opening exists in the west arm of Central, around the east rapids and west rapids. See pics from May 19th right. The open water you see is just south of main camp.

Local weather is calling for cool temperatures and a fair amount of rain for today and tomorrow. However, future forecast models show temperatures Friday, Saturday and Sunday are supposed to skyrocket into the mid 70's in the Big Hook area. Gauging the pictures, three days of 70 degree weather should take care of the ice in a hurry. Another plus, fairly gusty winds have blown over the last two days.  Those winds should have pushed the ice away from the shorelines.

Fortunately, the bay at Sandy Lake has opened up enough for float plane traffic. My plan is to grab the airplane from Selkirk on Thursday or Friday and fly north to Sandy.  From Sandy Lake I can at least begin staging goods to be flown up to Big Hook.

Think warm thoughts for us everyone.
-Nathan
www.bighookcamps.com
Posted by Big Hook Camps at 9:46 AM No comments:

ICE, it is THE story amongst fisherman in the north country every spring.  The big question, is it out yet? Well, no...unfortunately, not even close.  However, two positive ingredients are finally on the way:  warmer weather and rain.  Those two elements will deteriorate the ice rather quickly.  According to forecasts, highs this week in the Sandy Lake/Big Hook area will be hovering in the 50's and overnight lows will finally hold above the freezing mark. 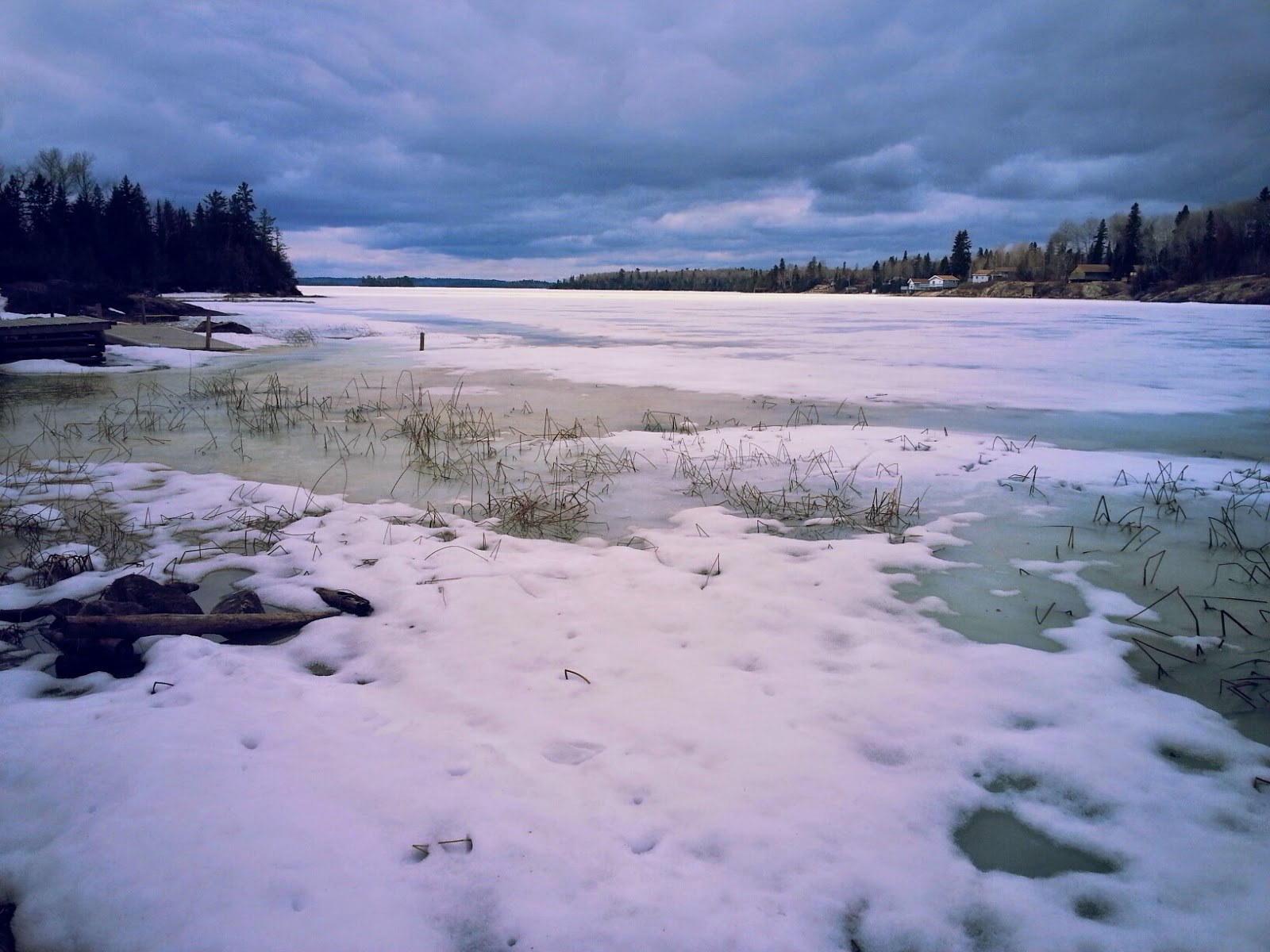 A historically cold and snowy winter in NW Ontario caused ice to reach 36+" on many bodies of water.  Coupled with a cool spring, the ice is certainly taking it's time to melt.  Fortunately, the majority of the snow has melted in the bush causing a decent run off.  Photo'd right is a pic along the shoreline at Eagle Lake.  As you can see the ice is still tight to the shore and after a quick stroll across the bay, I estimate about 8-12" of ice still exists.  In the past, ice out on Eagle Lake translated to ice out at Big Hook (250 miles north) about 4-5 days later.

Everyone here at Big Hook is excited and anxious to get the 2014 season underway.  The family here has a bet on when the ice will disappear at Central and throughout the Opasquia Park.  My guess (May 23), Dad (May 24), and Mom (May 20).  I am wishing and hoping to pick up the airplane (good ole XZK) from Winnipeg by next week.  My fingers are crossed that Mother Nature will cooperate and send us some tropical weather over the next couple days.  I'll keep posting photo's and updates as the ice diminishes.

Good luck to those of you who have open water.
-Nathan
www.bighookcamps.com
Posted by Big Hook Camps at 1:12 PM No comments: