2012 has raced to an end. Despite the Mayans predicting the end of the world, everyone will live to fish another day.  The 2013 season is already off to a super fast start for Big Hook Camps, with most lakes already 80% booked.  January brings us to the beginning of the Sportshow season.  Big Hook will be attending four shows during the first month of 2013 at Chicago, Milwaukee, Madison and Green Bay.  Stop in and share some of your favorite fishing stories with us.

Just last week Santa blazed over the Opasquia Park and had to throw on several layers to combat the super chilly conditions.  The arctic air has camped over the Big Hook area with temperatures dipping as low as -15 F.  The icy December is welcomed after a lackluster winter in 2011.  The subzero temperatures are creating plenty of ice for the winter highways.  Red Lake reported 16" of ice last week.  22" is the magic number for the transports to start running fuel and freight.  As many of you know, last year not a single transport made the journey along the ice highway.  The lack of transportation caused fuel prices to skyrocket in Sandy Lake to 2.50/litre, which is 9.73/gallon! Airline fuel transports were flying fuel almost everyday into the remote community to keep up with the demand of the diesel generators.   Needless to say, Dad and I are keeping our fingers crossed for a chilly winter.

Hopefully, a cool winter will allow many of you to get out on the ice.

The Hartle family would like to wish everyone the safest and happiest New Year.  We are looking forward to visiting with everyone at the upcoming sports shows soon. 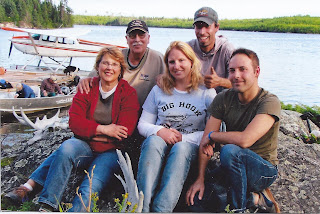 www.bighookcamps.com
Posted by Big Hook Camps at 1:40 PM No comments: