New Lures to Ring in the New Year

Each year tackle companies flood the fishing markets with hundreds of new products.  Many anglers, including myself, are hypnotized  by flashy new holographics or a manufactures claim that this new lure will  boat you a trophy fish on every cast.  As I have often told my guests while guiding, "Lures catch the fisherman and not the fish." This past weekend I had the pleasure of roaming the endless tackle isles at Cabelas and stumbled across three promising lures released in 2013 that could really produce specifically for walleye.

Light crank (pictured right).  This little guy has the potential to really produce when the walleye bight gets tough.  A crank that dives from 4-8 ft is also promising for when walleyes are corralled in shallower waters during the months of May and June.  Generally, during those months walleye are chasing smaller minnows and are apt to be more aggressive towards smaller baits.  I picked up three colors: Shad, Silver Blue, and Firetiger. 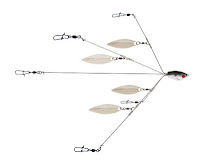 The second item (pictured right) I added is more of a rigging than a lure.  Known as an Alabama type Rig, this setup is a multi-armed rig that allows an angler to fish from one rigged lure up to five lures on.   Labeled with bait school technology, this particular rig is manufactured by YUM called the YUMbrella Ultralight Flash Mob.  Four blades team with a realistic-looking head to mimic a group of baitfish swimming in tight formation. Trolling the Rapala Ultra Light cranks behind this sort of rigging could lead to a heck of a good time.

The final product I purchased is called the Johnson Thinfisher (black/silver).  This small blade bait has a built in rattle that should just drive those walleye crazy.  I have had plenty of luck jigging blade baits for finnicky walleye in the past.  The extra vibration in these lures is just enough to entice stubborn fish. Unlike a jig, you try to keep this lure about 6-12" off the bottom, as these lures are prone to snagging.

I hope everyone is enjoying the new year.  In two weeks Dad and I will be rambling along the ice highway to Sandy Lake with roughly 13,000 pds of materials including pressure treated lumber, new 4 stroke Yamaha motors for Burnt Lake, and plenty of other equipment.

Make sure to stop by and visit us at the All Canada shows.  Mom and Dad are currently in Madison at the Marriot West.  The show runs Monday/Tues/Wed.  I'll be joining the family in Milwaukee and Green Bay the following respective weekends.