News From the North Country

The warm weather everyone experienced recently, and yes that even included Northwestern Ontario, has spawned visions of spring and summer.  A recent change in the jet stream brought temperatures well above freezing into the greater Sandy Lake area yesterday. Maybe we will get lucky and experience an earlier ice out this season. Finger crossed! The area just weeks ago was bombarded with temperatures reaching well below 0 and as cold as -45 F without the wind chill. 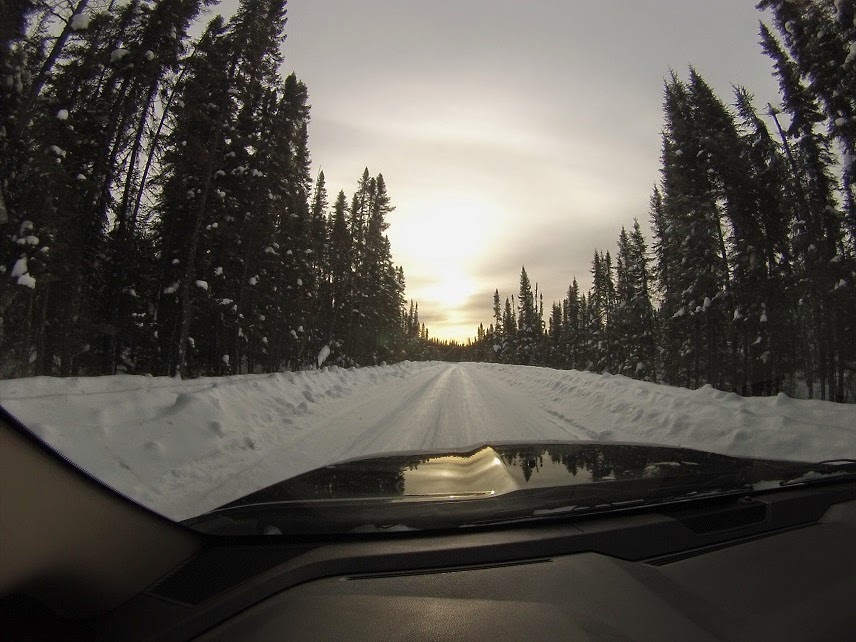 Mid February Dad, myself and a close friend ventured up the yearly ice highway.  The cold temperatures mentioned above accompanied us the entire voyage.  Six of the eight mornings we traveled dipped below a frigid-35 C (-31F), creating excellent ice conditions.  All in all, we managed to transport approximately 15000 pds of materials. Two boats, a new solar fridge and thousands of pounds of lumber were just some of the bulk we lugged.

This years journey was fairly uneventful.  The extreme cold held the road together amazingly well and allowed quicker travel.  When I say "quick", I mean we were able to accomplish our 226 mile drive in under 10 hrs. The only drawback to favourable road conditions meant more traffic on the highway. Drivers encounter dozens of blind twists and turns throughout the journey and must exercise extreme caution driving the narrow road, especially during the day. Twice over the years I have had to abruptly bury my truck into the snowbank to make last minute room for a barreling fuel transport. This year no such drama unfolded even though we encountered several fuel transports, freighters and many locals taking advantage of the ability to drive to Red Lake vs flying.

Only one animal was spotted in our four trips.  A single otter trotted down the middle of the road one morning oblivious to his whereabouts and even failed to notice a half ton truck immediately behind him.  Where this otter was attempting to travel was beyond me due to the fact no open water existed for miles.  Several signs of other wildlife was present such as fresh moose and wolf tracks.   One evening, I attempted several times to capture the dancing northern lights, however neither my GO Pro or cell phone camera were able to capture the aurora borealis.

One unfortunate instance however, cost us.  The morning we scheduled to pick up the majority of our lumber Dad's Ram 2500 began acting unusual, revving up unpredictably.  After about 20 miles, the RPM's failed to drop below 6000 and Dad burned through an extreme amount of gas.  All the signs pointed too, you guessed it, a busted transmission.  The only positive to that situation, we weren't 100 miles in the middle of nowhere when it occurred.  We parked the truck at a friends in Vermillion Bay and after several phone calls, were able to track down a Chevy Silverado half ton for the drive.


Good luck in your early season fishing adventures.  Spring is just around the corner.