With just one week of business left on the schedule here at Big Hook Camps, we are in the initial stages of closing up shop for the year.  The 2016 season has just absolutely rocketed by.  As we enter the month of September, fall is truly in the air. The leaves on birch trees have suddenly turned a
striking yellow, flocks of geese and sandhill cranes can be heard flying south and temperatures have descended with day time highs in the 50's.  Weather wise, September is always a volatile month here in the Opasquia Provincial Park.  This month sees every season; sun, rain, ice and snow are all possible.  Today's forecast: mist and rain with clouds in the tree tops and a high expected around 48 degrees.  While tomorrow we are forecasted to see sunshine and 70 degrees; typical September
weather.

Despite some windy conditions last week fishermen were still boating some quality fish.  Several large walleye were pictured and released.  A dandy 28" eye from West and another 30+" walleye from South topped the list.  Fish however were extremely deep, with most being found around 25 ft of water.  Vertical jigging 1/4 oz or 3/8 oz jigs while back trolling to hold on a spot was by far the most effective way to entice those deeper fish.  Trolling deep diving reef runners also managed to catch walleye.

Pike have been transitioning away from weed beds as the foliage begins to die.  After guiding
yesterday I noticed the weeds are beginning to brown and wither away.  Casting or trolling crank baits along rocky shorelines has been the most productive technique.  Also, plenty of pike are hanging around deep reefs with the walleye.  Using a leader, try jigging for the deeper pike with a 4" or 5" rubber tail.  The cooler water temperature, yesterdays surface temperature was 62, has pike favoring slower retrieved baits.  A 42" pike was boated and released at South Lake, caught on (you guessed it) a jig. 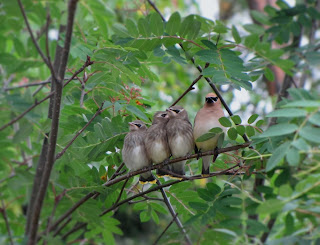 As the season winds down we are able to accomplish some projects at the outposts.  The new grey water systems have been installed at every outpost.  Cocos will be getting an interior face lift with new tongue and groove knotty pine walls. A new entry way door will also be installed at Cocos.  Hopefully the weather cooperates tomorrow and I'll be able to set a new crib for the dock at West Lake. We have several other projects lined up however, the weather is always a limiting factor as camps close up.  A snowy and wet fall can prohibit us from accomplishing everything we have planned.  Such is life in the north woods, here you are completely at the mercy of Mother Nature.

Good luck on the water this fall everyone!