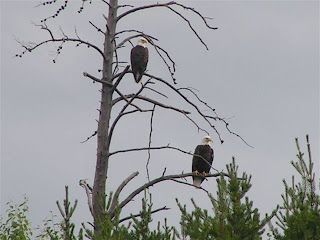 Last week Mother Nature played some tricks on us. The week began with pleasant skies and favorable temperatures. However, that all turned south for Wed, Thursday and Friday. Numerous thunderstorms and torrential downpours made for interesting fishing. Also, the barometric pressure dropped to the lowest I have seen in years, 29.36. I have found that frequent big swings in barometric pressure makes for tough fishing. Walleye turn lethargic and have a tendency to just "tail bite" the jigs. During these periods, it is common to retrieve your lure with just half a twister remaining. Smaller presentations often is a way to combat the light bite.
Fishing Tip
The Figure Eight often gets overlooked when fishing pike. Last week at Favourable, this little tactic boated an aggressive 37.5" pike. The Figure Eight is a maneuver where at the end of your retrieve, you place your rod tip in the water pull your lure alongside the boat in the pattern of an eight. Often, those following pike will turn around and strike. Pike often will hide just under the boat and surprise fisherman. The Figure Eight maneuver is not necessary 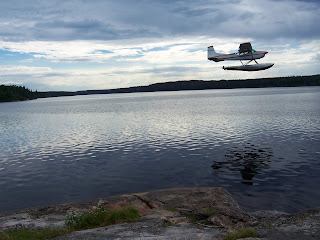 every cast, just once our twice on a spot will suffice.
Tackle Tip
Top water baits are probably the most exciting method of fishing pike. Watching a pike surge through the water and strike a bait still gives me goose bumps after all these years. Calm afternoons and early evenings are my favorite times to toss topwaters. Great lures are: buzz baits, Zara spooks, Dancing Raiders and Top Raiders. Remember not to set the hook until you feel the weight of the fish. So many times I have excitedly sent my lure zinging back at my boat in an attempt to set the hook prematurely.
Burnt Lake
Weed beds are holding both perch and pike. Try fishing the edges for the bigger fish. The shoals just 800 meters off the dock will start to hold larger fish this time of year. Large crank baits, bulldawgs, rapala wildeye shads are all great for reef fishing.
Cocos Lake
As noted for Burnt, weed beds are holding a great number of fish. There are great weed beds close to camp that are not to be overlooked. Remember the best fishing isn't necessarily on the far end of the lake. Several reefs in the middle north of the rapids were holding large amounts of walleye. Jigs are still my favorite way to fish walleye at Cocos, whether in the rapids or on the edge of weed beds.
Central Lake
Nice walleye are holding on reefs close to camp. Airplane island and Hippo rock have been very productive. Several 24-27" fish were caught last week. Trolling floating Shad Raps along 10-14 ft breakline's have been effective. I have started seeing some monster pike prowling the thick weeds in narrows on the north end of the lake. If there is a consistent wind for at least two days, remember to fish the windy shorlines.
Favourable/Lemonade
When in doubt, fish Lemonade. So far this year, the fishing on Lemonade has been nothing short of great. This shallow lake is impervious to weather systems. Consistent walleye over 20" and more pike than you want to deal with. Walleye Point and the Three Sisters on Favourable held great walleye action early in the week. Several of the reefs east of camp held big pike. Tossing a Gold Bomber Magnum was effective but the trophy lure was the Johnson Silver Minnow last week. Three pike over 37" were boated and released on the Silver Minnow.
South Lake
The size of walleye at South continue to amaze me so much that I forget there are monster pike in that lake also. Weed beds close to camp, straight across the bay from the dock, hold some big fish. The narrows to the SE of camp continue to hold both large pike and walleye. Many big walleye 27-29.5" were photo'd and released last week. Jigging reefs with a Wild Eye Shad can be fun, because you'll never know if you'll boat a big walleye or pike.
Southwest Lake
I honestly don't think the fishing ever slows at SW. This lake doesn't seem to get affected by weather fronts. Walleye are in typical summer patterns holding on the edges of weeds or rocky points deeper than 10 ft. Pike are anywhere you can find weeds. The eastern arm of the lake is a scenic boat ride, not to mention great fishing.
West Lake
West Lake boated and released both the big pike, 43" and the big walleye, 30" last week. Fish are beginning to descend into deeper waters. As noted above, fish are now in typical summer patterns. Weed beds in the NE corner of the fish bowl hold amazing pike. Bucktails and topwater are my favorite ways to fish those beds. The rock just off the dock should not go unfished this time of year. It is amazing how many big fish will hold so close to camp.
Good luck on the water everyone. Please remember Big Hook has a NO Trophy takeout policy. Which means NO pike over 27.5" and NO walleye over 18" can be kept. We want these fish to be in the waters for generations to come. Remember to send your pictures!
-Nathan
Big Hook Wilderness Camps
Posted by Big Hook Camps at 2:51 PM