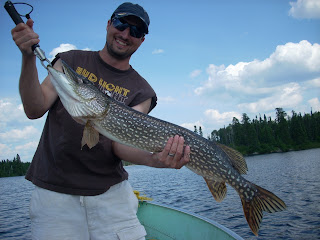 Just rolled in from guiding several days at West Lake. Sunny humid mornings and stormy afternoons have been the norm all week long thus far. Air temperatures have been flirting with the 90's earlier in the week. Today is cooler with wind blowing from the north and mist falling from the skies. Water temperatures are averaging a pleasant 72 degree's down to about 15 ft.
Weather is fore casted to remain warm with a day or two of rain peppered in.
Surprisingly, the walleye's have not begun their dive to deeper cooler waters. The last week I found fish holding as shallow as 4 ft and as deep as 18 ft. However, the majority of the fish have been caught holding between 10-12 feet. Trolling has been quite disappointing the past couple of days, I often find that changes frequently. Most walleye have been caught jigging on the edges of the weeds and on top of rock piles. Yellow was a hot colored twister on a 3/8 oz jig head. We haven't had a dark day lately so dark colors such as black and purple have been rather ineffective.
Pike have been extremely active in the weed beds. Calm afternoons are an exciting time to fish for monster pike held up in thick cabbage beds. Try finding weeds that grow in 6 ft or deeper for the larger fish. The majority of trophy pike are caught just on the edge of the foliage. While holding the boat off the weed bed, try casting your bait deep into the cabbage with a medium retrieve. Mann's Bullnose Swim Shads, Johnson Silver Minnows, Buzz Baits and Bucktails are all great baits to work through the weeds. Once that big fish is hooked get ready to battle him through the weeds, this is where most big fish are lost. Let your rod do most of the work, NOT your reel. Pull back and reel down to get that fish out of the weeds. However, if you are tired of cleaning cabbage off your hooks, try switching tactics and cast for pike on rock piles. Hunt down a rocky shoal that reaches up to about 10 ft from deeper water, especially one that you have been catching walleye on, and start slinging larger crankbaits, Rapala Wild Eye, or Bulldawgs. Pike often prowl rock piles waiting for a stray walleye to separate from the school.
Fishing Tip
This is the time of year where depth finders can be incredibly effective. Locating deeper rock piles can be key to a successful trip of catching fish. Fishing these deep reefs usually require jigging or bouncing a worm harnesses. Fish often will hold on top of the reef. However, if no fish are found directly on top of the rock pile, slowly back troll around each side. I find anchoring frustrating due to the fact the boat cannot stay mobile and chase the schools of walleye.
Tackle Tip
Fishing the weeds can be frustrating. Without the right bait or proper retrieve hooks will snag weeds every cast. As mentioned before, great weedless baits are the Johnson Silver Minnow or the Bullnose Swim Shad. Bucktails are a great bait to work over the top of the weeds and retrieve around the weeds. Keep your rod tip high when retrieving bucktails so you can navigate the bait throughout the foliage. A #8 Colorado blade bucktail is one of my favorites. 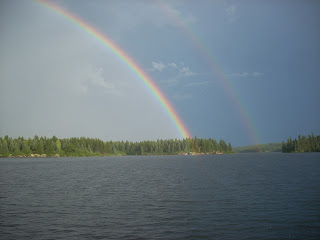 All of the camps had similar reports to which I addressed above. Central won the weekly trophy (7-17 through 7-24) with both the large pike and walleye for the week.
(Pictured above: Alan grinning from ear to ear with a great looking 38.5" pike caught and released on Central).
Good luck on the water everyone. Please remember Big Hook has a NO trophy take out policy. Which means all pike over 27.5" and walleye over 18" MUST be released. Take a picture and gently put the fish back in the water.
Take care.
-Nathan
Big Hook Wilderness Camps
Posted by Big Hook Camps at 7:46 AM