Once In a Lifetime

Often there are instances during a vacation that are remembered for an entire lifetime.  This week at Central a father and 16 yr old son were on their first trip with Big Hook. To learn the waterways better and get better acquainted with fishing techniques, Steve (dad) was hired for a day trip. That day at about noon everyone in the boat encountered a moment that they will probably never forget. Steve and the guests were discussing how often moose are witnessed at Central Lake.  As if prompted by their conversation, a cow moose sauntered out of the woods in the distance and began rooting around for lilly pads.  Dad had everyone retrieve their lines and slowly motored the boat towards the cow. Cameras were snapping and popping like crazy as the boat crept up to the feeding cow.  Finally, when they had reached a distance of about 100 ft the moose started to pay attention. Rather than galloping back into the woods the cow calmly stood fast and analyzed the floating vessel. 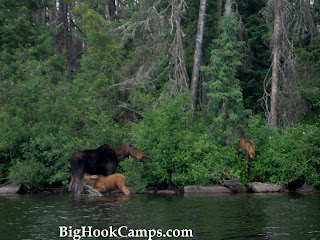 After determining there was no real threat, the moose glanced into the woods and out meandered one calf.  Cameras continued to click and shutter as the guests couldn't believe what they were witnessing.  The calf walked up to the mom and after a quick nuzzle began to nurse.  Just then another calf came sprinting out of the woods and immediately began feeding alongside.  For two minutes or so Dad and the guests witnessed an event that would be straight out of the pages of National Geographic.  Attached to the right are a couple of the shots they managed to record. 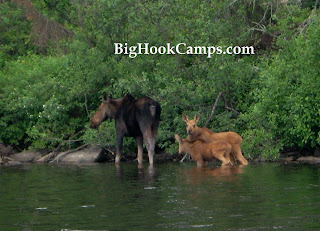 The weather over the past week has been far from stable.  High pressures have quickly been followed by low pressures only to return to a high pressure the very next day.  Huge swings in the barometric pressure were common the past seven days.  We did finally received a couple good dousings of much needed rain the past two days.  Last Monday night was the storm of the summer providing winds of 45+ mph and enough lightening to see clearly at 3 am.  We lost 18 trees at Central Lake due to the winds.   The winds the past three days have been peppy out of the west and southwest at around 20 mph.

Our temperatures have been all across the board with the unstable weather.  Temperatures peaked this week at 88 degrees and today (July 19th) our high is supposed to reach 59 degrees.  The cooler weather has dropped the water temperatures about 4 degrees on the surface to around 68 degrees.

The huge swings in the barometric pressure have the fish biting light.  Numerous guests have commented the walleye are finicky and just tapping jigs.  Many times a fish were striking resulting in half twister tails. Over the years, a pattern I have found is stable pressure results in great fishing.

Walleye have begun to move deeper to around 12-17 ft of water.  Jigging is still the most effective way to reach these depths.  If schools are difficult to locate, try trolling a Shad Rap #7 along 12 ft of water.

The pike have been present but also hesitant to slam baits.  Plenty of fish are being boated and released in the 32-36" range at all the outposts, but guests are having to work for strikes.  I guided twice this week and saw probably 4 or 5 fish in the 40" range but none would open their mouths.  The follows have been quite common the past several days and the fish have been lazily chasing the figure 8's next to the boat.  Sooner or later they will get hungry.

Burnt
Most islands in the lower half of burnt were holding larger schools of walleye.  Locating 12 ft was key. Big Boy Bay still has plenty of trophy fish holding along the weeds.
Central
The East portage has continued a hot streak for nice pike, which is really unusual, as the lake is known for better walleye fishing.  A 40" and 36" fish were caught back to back on the West portage.  Nice walleye have been boated around NE of the Big Island on the north end.  Husker Rock continues producing fish.
Cocos
Surprisingly, Cocos had a secondary mayfly hatch this week, which is really uncommon.  That slowed walleye fishing down as most fish were packed full of larvae.  The rapids still held fish and are easily navigable.  6-8 ft weed beds throughout the lake were holding pike.  Several nice fish were located on Duckling Island.
Favourable/Lemonade
Lemonade=good fishing.  The weather systems haven't affected that body of water. Favourable hotspots were Pike Alley, Three Sisters and the Mouth to the Severn River.  Several of the reefs in the Eastern half of the lake were holding nice walleye.
South
I haven't chatted with the guests at all from South this week as they have been out fishing on every visit.  My guess is the walleye are holding in the 12-16' range on various reefs throughout the lake.
SW
Southwest has probably reported the best walleye fishing of all the lakes this week.  Guests have found numerous schools of 18-22 inch walleye.  Jigging the wind blown points on the north end of the lake was the most productive.  The low water has made traversing to the NE section of the lake difficult but still possible.  Guests just need to tilt the motor into shallow drive and navigate slowly.
West
Guests boated and released several 38"+ fish on the first night in the Horseshoe.  The narrows to the Fish Bowl are holding nice pike. The reefs on the north end of the lake are now holding some trophy walleye.