Summer has taken hold here at Big Hook Camps in the Opasquia Provincial Park.  Bluebird days ranging from 68-82 degrees have graced us throughout July. During the past two weeks we have only witnessed about an hour of rain.  The water levels have dropped considerably due to lack of rain and evaporation.  Lake levels are down about a foot since July began.  We are to the point where a couple days of rain would do us plenty of good.

The sunny days have warmed the water into the upper 60's and lower 70's, depending on the time of day and location in the lakes.  As predicted, once the water temps began creeping into the upper sixties the mayflies emerged more consistently last week.  The good news is, the mayfly hatch has been spotty and sporadic over this year.  Walleye's bellies haven't been packed full which is a good sign for fisherman.  Today (friday the 14th) we haven't seen much mayfly activity at all.

The walleye fishing, at least at Central Lake, seemed to hold consistent throughout the week. Some parts of the lake would slow where the mayfly hatch was more intense, and fisherman would have great success in areas of water away from the hatch.  Lots of big walleye at 22"+ with a 26.5, 27, and a 27.5" were boated and released this week at Central.  The only other outpost I've had a chance to talk to was Cocos.  All the other outposts were out on the water enjoying the beautiful weather. Cocos reported the lake was a walleye factory despite a fair amount of mayfly activity.  Walleye were crushing even northern baits.  The falls was a great producer along with any windblown rock reef.  Lots of walleye were holding on the edges of weed beds. 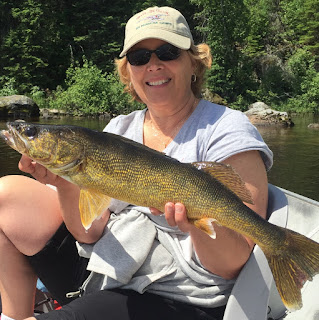 Now that we are post may fly hatch the walleye should start to transition to rocky shoals and reefs.  I would also expect to see more fish in the 10-15 ft range especially if the water continues to warm.  Vertical jigging 1/4 oz to 3/8 oz jigs while back trolling is my favorite technique to boat walleye this time of year.  Trolling Shad Raps or Reef Runners along 10-15 ft break lines will help locate schools.

The high sunny skies and calm waters caused the northern fishing to slow somewhat during this week.  Glassy water and bright sunshine will often result in follows vs strikes while northern fishing.  The fish can easily see the boat and decipher the bait during sunny conditions.  Early morning and late afternoon will be more productive when weather like this occurs.  Working top water presentations with Zara Spooks, Buzz Baits or Top Raiders are also a great method to induce strikes from timid fish.  Smaller baits are still being favored by larger pike.

Central has had several 30+" inch fish and a couple over 35+". It should be noted that the guests at Central are primarily walleye fisherman and have been catching these pike while targeting walleye.  Cocos noted the pike were timid mid day with the high sun, witnessing lots and lots of big fish follows but few connections.  On cloudy days those fish will feed.  Hopefully I'll get more reports tomorrow when I have a chance to talk with the other outposts.

Good luck on the water everyone!
-Nathan
www.bighookcamps.com
Posted by Big Hook Camps at 9:12 AM