The days are running long here at Big Hook.  Our official sunrise is at 4:44 am with the skies getting light around 4 am.  The official sunset 9:51 pm and darkness doesn't truly settle in until after 11 pm.  However, our long days disappear rather quickly as the summer progresses along.  Now that we have passed the summer solstice, we lose an average of four minutes a day. 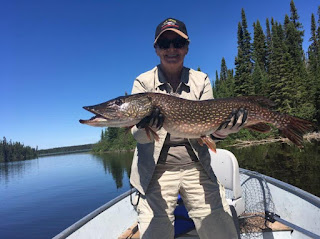 The fisherman have been taking advantage of the extra daylight.  The early bird gets the worm, right? Walleye fishing generally is better during the morning and evening hours, but not always.  The walleye around this area will feed all day long, and they have been. Reports from all the outposts this week stated the walleye fishing was amazing.  Burnt, Central, and South all released multiple walleye exceeding 27". West stated they boated the most 20-23" walleye in over a dozen years of fishing that lake.  Central had the biggest for the week measuring at an impressive 30". Most fish are still holding near the shallow mud flats, with some beginning to hold on rock reefs and windblown points.  Trolling Hot N Tots or jigging 1/4 oz jigs with Berkley Ripple shad tails were the best techniques for walleye.

Some mayfly larvae have been found in the bellies of filleted fish.  With the water temperature hovering around the 70 degree mark on the surface, I expect the mayfly hatch to begin any day now. The hatch will most likely occur a bit earlier than last year with all the hot weather we have been experiencing. 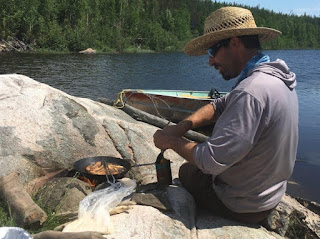 The big northern pike were a bit finicky last week. A good number of pike were boated however, the big girls were timid.  I attribute that to the massive amount of walleye holding near weed beds and mudflats; those big northern could easily pluck all the rouge walleye they wanted at their leisure.  Also, we had a high glaring sun all week long, that allows a fish to see an artificial bait quite easily.  Now don't get me wrong, many fish between 30-38" were boated and released.  We just didnt' see those big 40+" moving as much.  The lures that were most effective were shiny spoons and bucktails.  Williams wobblers, Johnson silver minnows and Mepps #5 bucktails were some of the favorites.  Top water baits started to move some fish also.

As mentioned earlier, we had copious amounts of sunshine last week.  The temperature held between 78-94 degrees just about all week long. A sprinkle of rain dropped on Friday and that is about all the rain we have had in the last couple weeks.  The hot sunny days have caused a lot of evaporation to occur on the lake and the levels have dropped considerably from the prior week.  We really could use some precipitation.  The weedbeds, however, have enjoyed the sunlight.  Weeds sprung from the depth and are just about reaching the surface in many spots.