My apologies for a delayed blog. Mid May to the first of June is always a mad dash to open up Big Hook Wilderness Camps and I have very little time to sit down at the computer.  However, around the end of April to the beginning of May, I am glued to about 20 different weather sites hoping for one to report warm weather around the Opasquia Provincial Park.  Once the ice begins melting at Big Hook in early May the long days begin.  For the 2018 season, I arrived at the Central Lake dock in good ole XZK (our camp airplane) on May 15th.  May 15h will go down as an average ice out. We have had the ice disappear as early April 30th to as late as June 2nd.

The flight north from Vermilion Bay to Central was tense as I watched a snow storm descend from the west and just about forced me to land on an unnamed lake somewhere between North Spirit and Sandy Lake.  Fortunately, as I pressed north I was able to outrace the storm and land safe and sound at Big Hook.  The storm did eventually catch up to me at Central and dumped 3-5 inches of snow leaving me socked in at Big Hook with camp dog Shadow.  Since that first day of arrival, everyone here with Big Hook has put in long days and nights readying every camp and wiping away signs of winter damage.  Just about every camp survived the harsh winter. Central must have endured a harsh ice/snow/wind storm as dozens and dozens of trees were snapped.

The weather has been all across the board this spring for opening camp.  We have seen nights as cold at 24 degrees and days as hot as 96 degrees.  Water levels are average due to a heavy snow runoff but May only brought one sprinkle of rain.  Fortunately, we are finally seeing some of our first spring rains today.  Conditions are extremely dry as NW Ontario was under a burn ban last week. However, I suspect that to be lifted after today's rain.

We have had one full week of guests so far in the 2018 season.  Reports from all guests were positive.  No reports of post-spawn activity from walleye were mentioned as fish were hungry and grew more aggressive as the week progressed. The biggest walleye was boated and released at South lake measuring at just shy of 30", with many other big females released.  Largest northern went to West Lake at 44", caught on...a jig.  Northern pike was striking smaller baits, which is typical of this time of year until the water warms.  Both species were found to be grouped together on shallow mud flats chasing bait.  Some walleye were returning to the rapids and should continue to do so for the next couple of weeks. 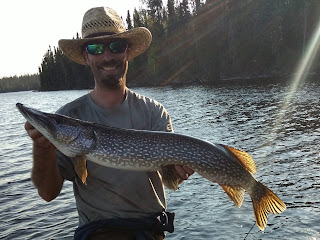 Best action for both species at Central Lake took place at the south rapids and the west narrows.  I managed to fish an hour last Wednesday and boated twenty pike in an hour near the east rapids.  Tossing and slow twitching a suspending F18 Rapala was deadly.  Several 32". 33" were released accompanied by a chubby 38".  Walleye are striking small jigs in the shallows right next to the pike.  Water temperature in the sun-soaked shallow bays peaked around 59 last week. 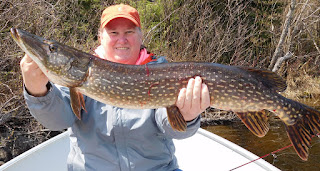 The north shore of the Fishbowl produced the most action.  The East portage had an active perch bite along with hungry walleye.  A 40, 42, and 44" pike were all caught in an hour on the same spot.  Those big female pike were hunting a huge school of walleye.  Guests claimed they were catching walleye just about every cast and then nothing.  Suddenly, the pike moved in and began smacking their jigs.  The deep north end of the lake was slow as the water was almost ten degrees cooler.

Looking forward to seeing everyone this season and good luck on the water!
-Nathan
www.bighookcamps.com