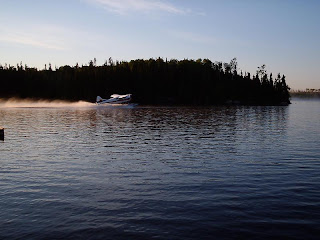 This time of year Big Hook Camps in the Opasquia Provincial Park both pike and walleye are aggressively feeding to pack on pounds for the coming winter months. Larger fish can weigh several pounds heavier in late August versus early June. The declining water temperatures and shortening days both trigger this feeding frenzy. The outside air temperature has been cool this week, hanging around the mid fifties with dark skies. The water temperatures have followed suit and have declined to around 60 degrees. The last four days dense lake fog has limited boaters visibility until about 9 am.
For current weather in the Opasquia Provincial Park/Sandy Lake area visit:

During the fall feed fish are more apt to strike larger baits. For pike, big baits like Suick's, Bulldawgs, Top Raiders, Tadem Bucktails, Swimmin Joe's, and Bomber Magnums are all common to use this time of year. Bigger baits mean you need to bulk up on bigger gear. Medium heavy 6'6" rods are a minimum. I like to use 50# Power Pro with a 9 inch titanium leader. For walleye, larger Reef Runners, Rapala Shad Raps, and jigs with 4" tails are great baits.

It is often a pike will strike a large walleye boatside and will refuse to let go. Guests last week at West Lake even had a 41" pike jump in the boat after a walleye! The Pomilia group was fishing weed bed in the fish bowl (southern half of West Lake) when David Pomilia hooked a 16" walleye and proceeded to lift the fish into the boat. As he was hoisting the walleye over the side, a huge pike exploded from the depths in hopes to strike this walleye before it disappeared into the boat. David recoiled quick enough and stared in disbelief as a 41" pike was flopping at his feet. Grateful he didn't loose a hand to this fish, David got a quick picture with his "semi caught" trophy and a prompt release was made.

Every camp last week was lucky enough to boat and release a pike over 43". More proof the big boys are looking to pack on some winter weight.
Walleyes are prowling deeper waters 15-25ft are average depths. Jigging is the easiest way to reach these deeper waters. The dark skies this past week have made darker lures more effective.

Good luck on the water everyone. Remember to throw the big ones back. All walleye's over 18" must be thrown back and all pike over 27.5" must be released.
-Nathan
Big Hook Wilderness Camps
Posted by Big Hook Camps at 8:23 AM