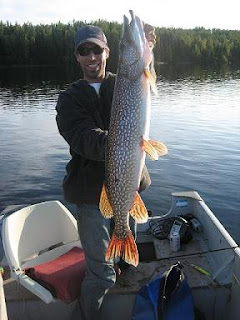 August is letting us know that summer is still trying to hang around. We finally have had some sunny skies and warm temperatures. Weather has been hot the last three days, hanging around 85-90 degree's in the sun. It is amazing how fast the water temperature's sky rocket after just a few days of sunshine. Water temperatures have blasted up from 64 to about 72 on the surface.

The fish have responded to the warmer temperatures by sinking to deeper depths. We have been catching walleye's from 12-25 ft. Some of the bigger female's have been caught in the deeper waters by trolling larger crankbaits such as: White reef runners and Rapala fire tiger husky jerks. Otherwise, my favorite method is still vertical jigging on the deeper reefs. The wind blown shores are mainly where the fish are congregating. Just try to find a reef or point that has had the wind pounding it for a couple of hours. Pike are scattered between deeper weed beds and rocky reefs. During these hot hot days pike action has been better from 2 pm to 7 pm, when the sun is off the peak. We have had some tremendous surface bite's when the wind calms down in the evening. Effective lures this week have been: Mepp's Agila #5 copper blade and a Swimmin Joe, oh and I can't forget the Shallow Dawg for pike. For walleye, 3/8 oz jig and a pumkinseed Gulp tail and a blue and silver Hot N Tot. 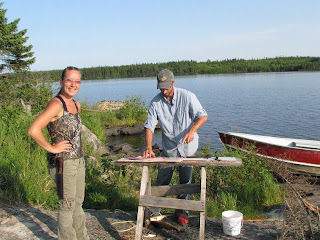 We just wrapped up filming a TV segment for Real Outdoor Desinations. We filmed for two days and got some great footage. Several big pike were caught and many many walleye. I mostly jigged with a 3/8 oz pink head and a pumkinseed Gulp tail, while Tas (the host) casted a Swimming Joe for pike. The show is looking to air around the beginning of January on the Sportsman's channel and the Persuit network. I'll keep everyone posted on the details. ( Picture right: Tas, hostess of Real Outdoor Destinations, and I work on filleting fish for a shorelunch.)

On the fishing front.
Guests last week at West boated many pike over 35" up to 40.25". Most fish were caught in the horseshoe near camp. South Lake had a great night shortly after a thunder storm boating and releasing a 28" and a 30" walleye back to back. Two gentlemen at South West Lake tallied 597 walleye for the week. Central Lake found many honey hole's of walleye's in the 21"-24" range. The weeds in the narrows on Central are holding many big pike. 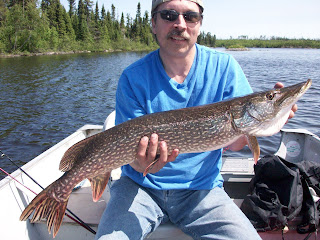 Good luck on the water everyone. Remember to put the big one's back. Please note Big Hook has a NO TROPHY TAKE OUT policy, meaning all walleye over 18" must be released and all northern over 27.5" must be released.
Nathan
-Big Hook Wilderness Camps
Posted by Big Hook Camps at 10:41 AM