Luck of the Jig

Year after year pike fisherman arrive at Big Hook Camps armed to the teeth with baits the size of a 2x4 to entice a trophy.  Heck I am one of them, I have a closet full and I mean FULL of countless pike baits that catch ME in the store.  "Yeah, I'd totally eat that if I was a fish," I mumble to myself while standing in my favorite fishing shop.  I have so many baits for pike that I could probably start my own tackle business.  However, it never fails, year after year one simple lure quietly boats more forty inch fish and undermines every pike fisherman's strategy.  This mythical lure of legendary status is none other than....the jig.

The simple jig and twister combination is lethal for those big pike. However, 99% of the time fishermen are targeting a much different species. Catching trophy northern while walleye fishing is often referred to as an accidental catch. Boating those big pike on a jig reverts to one factor, luck.  The jig location among all those sharp teeth determines whether one will hoist a fish in jubilation for a memorable photo.

As I mentioned in an earlier Facebook post, the jig has been the lure for picture worthy pike this week.  The big girls have been shunning bigger baits and striking smaller fare.  Lately, I have been implementing jigs and 4" tails into my guiding tactics, with great success.  While using jigs to target pike, I like to splice a 24 inch section of f pound flourocarbon line to act as my leader. This combo can withhold several nicks from those nasty teeth.

Jigs are not the only lure catching pike at the moment.  As a matter of fact, the top water bite has been very exciting as of late.  7-9 pm when the wind and waves have finally calmed is a great time to attack the surface.  Top raiders, dancing raiders, zara spooks and buzz baits all are great 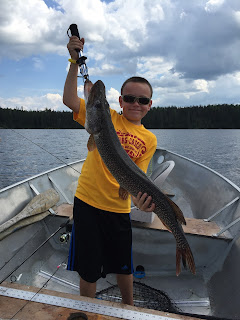 Action on the walleye front has been positive.  Fish are slowly descending the water column, as we have seen water temperatures finally rise past 70 degrees on some lakes. Most are being caught in 12-16 ft of water, with some bigger fish in 20 ft.  A 1/4 oz jig head with a 3" flouro orange tail has been the bread and butter combination of the summer.  Another bait I'll begin using more often this time of year are echotail blade baits, 1/4 oz silver, red or black.  Focus on those rock humps and wind blown points and vertically work below the boat.

Aside from fishing, the blueberry crop is just about ready for picking and it looks to be a bumper crop this year.  South facing bald rock faces and old burn areas (Burnt lake outpost hands down is the best) are premium locations for this tasty fruit.  In my opinion nothing beats fresh baked blueberry muffins or pancakes.  Raspberries are also in season.