August is my favorite month up here in at Big Hook Wilderness Camps.  The first couple weeks of the month typically act as a transition from hot summer temperatures of July to fall like conditions of early September.  One of several reasons I enjoy fall is, the northern lights.  Daylight begins to fade quickly in August. Gone are the sunlit nights until 10:30 pm like we experience in June.  At 10 pm you can actually enjoy the night sky while getting lost in the stars and milky way. If you get lucky the northern lights will throw on a really great show.  Keep your eyes focused to the north for best aurora borealis action.  I should note the Perseid meteor shower is the 11th-13th of August this year and should be amazing if the night skies remain clear.

Another reason I enjoy August so much is the lack of bugs.  On an average year the mosquito quits buzzing around the end of July and by August they are pretty much obsolete.  There are a couple mosquitoes here and there at the moment but they are disappearing rapidly.  Bugs and northern lights aside, the fishing in August is pretty darn good too.  I actually prefer August fishing to any other month.  The pike are throwing on the feed bag and are packing on the pounds for the quickly approaching winter. The walleye are rather predictable in August.  Most walleye are holding in 10-20 ft of water on rock piles.  Vertical jigging under the boat is the absolutely no questions asked the best way to catch boat loads of walleye in August. If the weather holds stable, the fish stay aggressive.

It has been rather pleasant here in the Opasquia Provincial Park.  Highs in the mid 70's and light winds have made fishing fairly easy throughout the week.  Conditions are still extremely dry and we are badly in need of rain.  The lack of rain has the lake levels incredibly low at the moment.  Be super careful when having shorelunch and out door fires.  Please make sure your fire is completely extinguished when you are done.

Fishing at Central Lake has been pretty spectacular this week.  When you can boat and release 100 walleyes in three hours of angling, you have the ability to brag about the fishing.  Guests have been catching hordes of 16-20" walleye this week jigging in 10-20 ft.  1/4 oz pumpkinseed jigs have been the go to bait. Numerous walleye have also been in the 22-25" range.  The pike have been active when the clouds pop out and several 35-38" fish have been boated on Johnson silver minnows.  Top water action has been electric for northern. Smaller propellered Zara Spooks have been amazing.

Burnt Lake popped a couple big northerns when I last checked in with them.  Big Boy bay is the place to be at the moment for trophies.  The walleye bite has been steady with a couple topping out at 25" were photo'd and released. Don't forget the amazing perch fishing in the weeds if you want to take a break from walleye and northern fishing. 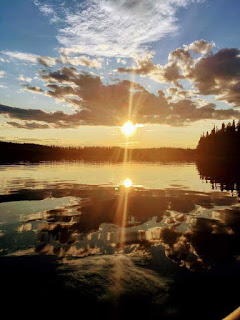 Cocos Lake guests have been focusing on the the deeper pools located in the Sagawitchewan river and have been doing really well for both species.  They noted the water was the lowest they have seen in almost twenty years.

West Lake has been hitting the water super hard and I haven't been able to chat with the guys this week.  The rock in front of the dock is always one of my go to spots this time of year.  Also, the numerous walleye reefs on the north end of the lake should be holding some huge walleye this time of year.

Southwest Lake never seems to slow down with the quantity of walleye.  The last guests trolled crankbaits along all the shorelines and claimed they boated fish wherever they went.  Nothing huge was boated last week but a ton of fish were caught.

South Lake admitted the week began on the slow side.  The numbers were down but there were some quality fish boated and released.  Several 27" walleye plucked 1/4 oz jigs with orange tails.  The fishing picked up however mid week and the guys said Wednesday was great.