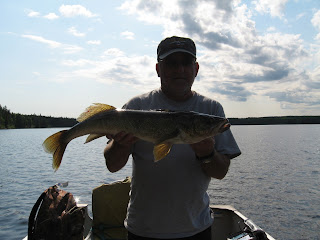 Overall, the weather held up well last week. One storm squall brought us ample amounts of lightening and even some hail. Typically, fish will bite like crazy just prior to sweeping fronts. Just keep in mind you should get off the water when you see lightening crashing in the distance.
Water levels finally seem to be topping out. It is amazing how fast the water has shot up in one week. Central is the highest of all the lakes with water almost over the tops of the docks. Cocos is usually the last to peak because the lake is at the end of the river system.
Fishing tip: You have probably heard this before, but while pike fishing don't forget to do a figure eight at the boat every couple of casts. You would be amazed how many fish will shoot up from the depths and slam your bait boatside. Also, if you have a big pike follow your lure, try slinging a jig on a leader immediately after that fish swims out of site. Chances are that timid fish will strike a smaller lure.
Tackle recommendation: Flourocarbon leaders can make a huge difference for fishing. Flourocarbon is a monofilament fishing line thats doesn't reflect sun light, thus making it invisible to fish. 50# flourocarbon leaders are great vs traditional steel leaders for boating timid, lethargic pike.
Central Lake
Central boated and released the largest fish of the week, a beautiful 45" pike. Caught by Wally from the Cook party on his first trip boated the monster just 400 yds from the camp on a small Mepp's spinner. With the high water walleye's are holding tight to all four incoming rapids. Husker rock was a hot spot for eye's bigger than 23". Trolling a silver fat rap through the West narrows was really effective. Other large pike were caught on the west portage and in the north narrows.
South Lake
The walleye's cooperated all week long reported the Brutcher party. Many fish were caught and released over 25". The topside of the rapids on the north end was superb. The narrows just south of camp was also excellent. Weeds are beginning to thicken on the north end of the lake. Water levels have come up about a foot throughout the week.
West Lake
The high water has the waterfalls flowing and the fish holding tight to the current. Don't be afraid to fish well away from the rapids for big prowling pike. The narrows again were the hot spot for monsters. Largest pike topped at 43" with several others larger than 40". The guests managed to net a 40" fish that T-boned a smaller 18" pike at the boat. That is a rare feat, normally the big fish let go. The weed beds in the fish bowl are heating up with thicker foliage holding many fish. The north end of the lake is producing, reefs on the east side are holding large walleyes.
Cocos Lake
The Mroz party submitted an awesome list of pike caught and released during the week. For example here are some of the fish caught. 14 pike caught over 35" and two pike reaching a staggering 43". Several 25" walleye were photo'd and released also. Many of the fish were caught in cabbage beds. Hot lures were doctor spoons and johnson silver minnows. The rapids are still navigable, although more and more water is spilling through daily.
Burnt Lake
The Long party had huge smiles on their faces after a week of great fishing. According to them, fish were holding on points and everywhere the lake narrows. Several large perch were boated. Perch were holding in the weeds. As usual, the narrows held thousands of fish. Pike are prowling between reefs and weeds.
Favourable/Lemonade
Lemonade produced hundreds of walleye along with many perch and saugers. Pike are always striking on Lemonade, however it is typical just to catch fish around 20-24". For pike Lemonade always has the numbers but it is tough to get the size. Nice walleyes between 18-22" are common on both Lemonade and Favourable. Fish are holding both in mud flats and rocky points. The creeks on the "elbow" of Favourable were holding plenty of both species. Pike were a little timid throughout the week, commonly following the lures to the boat. Note the fishing tip at the beginning of the blog. Several nice pike over 35" were boated and released. I'll be guiding on Favourable in the near future and will be able to report specific locations.
Good luck on the water everyone. (Pictured above: A nice walleye boated and released from Burnt.)
Nathan
Big Hook Wilderness Camps
Posted by Big Hook Camps at 8:04 AM