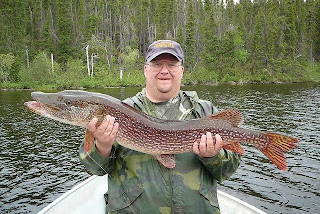 The bite has been fast and furious here at Big Hook Wilderness Camps in the Opasquia Provincial Park. Walleye and pike are cruising the mud flats and flowages together in search of bait fish. Water temperatures are quickly warming into the high 60's due to a nice couple weeks of pleasant weather.
I was able to chat with numerous guests last Saturday and all reports had thumbs up.
Favourable boated a dandy 44" pike caught in a random spot. "Pike over 35 inches were common place," quoted another Favourable Lake guest.
Cocos came in a close second with a giant 42.5" gator. Hopefully pics will soon follow.
All guests from the outposts said fishing was outstanding. It was unanimous that the fish are still hold shallow and enjoying the sun.
I have been guiding here at Central the past couple of days and the fishing has been outstanding. Today we left the fish biting and the count was 153 for the day. Many big fish w 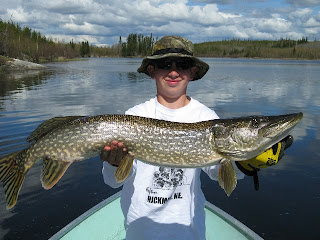 ere seen and caught, and released. Above is a photo of a big ole 41.5" pike caught and safely released by Kurtis on, of course, a jig and twister. Several 25" walleyes have been boated and released also here at Central. Top lures have been 1/4 oz jig and pumkinseed twister for walleye. For pike has been a flouro orange daredevil copper spoon.
The other photo attached is a young master angler in the making. Joel is showing off his prize fish for the week. Great shot Joel!